Staff Picks: Most Anticipated Shows of the Summer 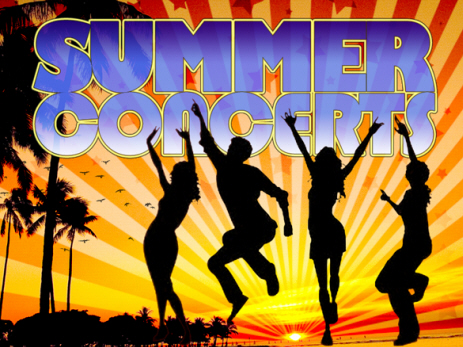 The Public kind of beat us to the punch with its whole “Best Summer Ever” proclamation in this week’s issue, but we have to agree with the paper on this one, at least in a live music sense. Every year, the city’s summer music schedule seems to get better and busier, with bands coming to town they may have passed us for Toronto or Cleveland in the past. Between the revitalized Canalside schedule to the endless club shows that get announced on a seemingly daily basis,  this very well may be the best (music) summer ever. Below are a list of staff picks, selecting our most anticipated Buffalo shows of the season (Spoiler: a bunch of us are pretty hyped for Spoon). For more summer options, make sure to check out our events calendar here.

Anyone who’s ever seen Ceremony knows they put on a show. Through all their incarnations, from power grind band and genre defining hardcore to their most recent transition of a punk flavored, Matador-signed, indie unit, Ceremony has never wavered in their live intensity. I saw them at Mohawk a few years back and they wrecked the place. I saw them at Funeral Home and it was probably the craziest show I’ve ever seen there. Expect no different July 5th. And Pity Sex on the bill too? Forget about it.

I’m really looking forward to seeing Mac with his full band in tow this time around. If you were at his Tralf show last summer, you got to see him crank out all of his tunes solo (with the exception of the enthusiastic stranger who jumped in on drums at the end) due to some transportation difficulties. While the show felt like an exclusive, cozy hangout with the charming crooner, I’m ready to get the full jangly-haze-rock experience.

While there are a lot of great shows happening this summer,  I certainly found it hard to narrow it down to one, but I think the one I’m most excited for is a indie/psych rock band out of Chicago called YAWN. I’ve been waiting to see them for a couple years now, and the fact that one of my favorite local acts, Lesionread, is opening the show,  just makes it that much sweeter.

Although Ceremony is billed as the headliner, I am most looking forward to seeing Michigan’s Pity Sex this summer. The fuzzy emogazers have become one of my favorite acts (I called Feast of Love my favorite album of 2013 way back when). You can expect some sludgy, driving bass beneath the woozy male and female vocals… I am already woozy with excitement.

While there are obviously tons of classic and alt-rock shows to be excited for this summer, I can’t think of any show that I am more excited for – in terms of overall experience – than the Buffalo Niagara Blues Festival. The festival, now in its second year, takes place at Silo City and more importantly, allows guests the freedom to explore the nearby decaying factories and grain elevators. There are also various vendors, food trucks, and plenty of space to set up a lawn chair and blanket. Performers include Smokin’ Joe Kubek, Teeny Tucker, Tony Monaco, Mississippi Heat, and Chicago Blues Connection. The show is free, and will take place Saturday, July 11th from 12:30pm to 10pm Come for the beautiful and iconic views of urban decay and Buffalo; stay for the excellent, fiery blues.

DC invades Buffalo once again alongside Richmond punx Barge. The Barge set after Damaged City Fest last summer was one of the best of the weekend. One can only hope this show will be just as raucous.

My Buffalo summer concert of the year has to be Father John Misty at the Town Ballroom August 1st, if only because I’ve already seen him on this tour back in Febrauary, and the show was spectacular. Not seen in these parts since his victorious performance opening for Youth Lagoon a few years ago and backed by an exceptionally capable band more than able to recreate the rich sounds of Fear Fun and (album of the year) I Love You, Honeybear, Josh Tillman will have the intimate Town Ballroom eating out of his hands. Spoon’s long overdue Buffalo debut at Canalside on June 25th is also a cannot miss show, and a tremendous get for Funtime and Donny Kutzbach, who deserves the key to the city for landing this one.

I was thinking about using FJM for this post, but Cliff stole my damn thunder so I will go with Spoon on this one. Over the hundreds of shows I have caught over the years, Spoon has always somehow alluded my grasp, so I was thrilled to hear that the Texas band would be the highlight of this year’s free Thursday at Canalside series this summer. Would Spoon have played Buffalo for free five years ago? Prob not, which goes to show how far this city’s music scene has gone. With another fantastic album under its belt in They Want My Soul, Spoon is at the top of its game, having reached that can’t-do-wrong status years ago (I liked Transference thank you), so don’t miss this one.

It hurts my head to try and recall by mere memory the number of quality shows Buffalo has lined up for this summer. Father John Misty. Pity Sex. My Morning Jacket. Mac Demarco. Spoon. Blonde Redhead. Real Estate. Hell, even this year’s Herd Fest lineup is something to drool over. The list goes on. But if there is one show I’m particularly looking forward to (there is, that’s the whole point of this article), it’s The Tallest Man on Earth’s July 22nd stop at Asbury Hall.

My aforementioned anticipation list may have some heavy-hitters on there, but the era-bending acoustic folk of Swedish native Kristian Matsson has been on my “live show bucket list” for years now. His newest album Dark Bird Is Home basks in the man’s ability to pour himself into track after track, this time with a full band backing the oft-solitary folk singer on nearly every song. (Shameless plug to my review of the album here) Though I’ve got to say, I’m keeping fingers crossed for a set that spans equally all four of his wonderful albums. Suffice it to say that his 2015 summer stop at Asbury Hall, which by the way is awarded a prestigious “one of Ron’s favorite venues” award, has shaped up properly into my most anticipated show this year, at least so far. Father John Misty’s early August show at the Town Ballroom earns a very honorable mention though.

The slate of shows coming to Buffalo this summer is nothing short of amazing, with artists like The Kooks, Father John Misty, Tyler, the Creator, and Real Estate all heading to Buffalo, this looks like one of the strongest line-ups we’ve seen. That said, when picking my show of the summer, there is really only one choice, and that is Spoon. The band is bonafied indie rock royalty, and over the last 18 years, no group has been as consistently excellent, delivering incredible album after incredible album, the way Spoon has. Almost every artist has a peak and low in its career, but ask any Spoon fan his/her favorite album and chances are the answers will be wildly varying. That a band of Spoon’s magnitude, who can sell out most of the city’s largest venues on any given night, is playing a free show in Buffalo is nothing short of astonishing. If there is one single show this summer in Buffalo you don’t want to miss, this is the one.

The concert I’m looking most forward to? The Buffalo Philharmonic Orchestra’s tribute to Stevie Wonder. No, I’m serious. The BPO takes on a whole different persona when it breaks out of Kleinhan’s acoustically minded walls, and if you’ve ever heard dulcet Stevie Wonder instrumentals playing in an elevator or waiting room, you know that this will be the high-octane version of that. On July 16th, the BPO will prove, once again, that orchestral music is anything but stuffy.

This summer, there are two bands coming to Canalside that trump all the other great acts coming to Western New York. Both of them from an era where you could name your band something fairly normal, and not have to worry about getting lost in a shuffle of irrelevant internet search results. These bands are, of course, Cake and Spoon.

Personally, Spoon is a little more exciting for me. Cake hasn’t had anything new since 2011 while Spoon most recently released the fantastic They Want My Soul. Also, I feel like I have to avenge a personal experience I’ve had (or actually, missed out on) with Spoon. Despite having listened to the band since I was a little clean-shaven junior in high school, I made the mistake of having not committed Britt Daniels’ face to memory. So of course, when they were recording They Want My Soul down near Fredonia with Dave Fridmann, and Daniels and the boys made a stop in BJ’s, I sat there with my PBR, across the bar from him, and didn’t even know it.

So when Spoon rolls around on June 25th, you know I’m going to be there, in the first row, intently memorizing every little detail about Britt Daniels and Jim Eno so that if I’m ever in that same situation again, I won’t make the same mistake. That is the reason why I’m so excited for Spoon at Canalside this summer. That and it’s free.