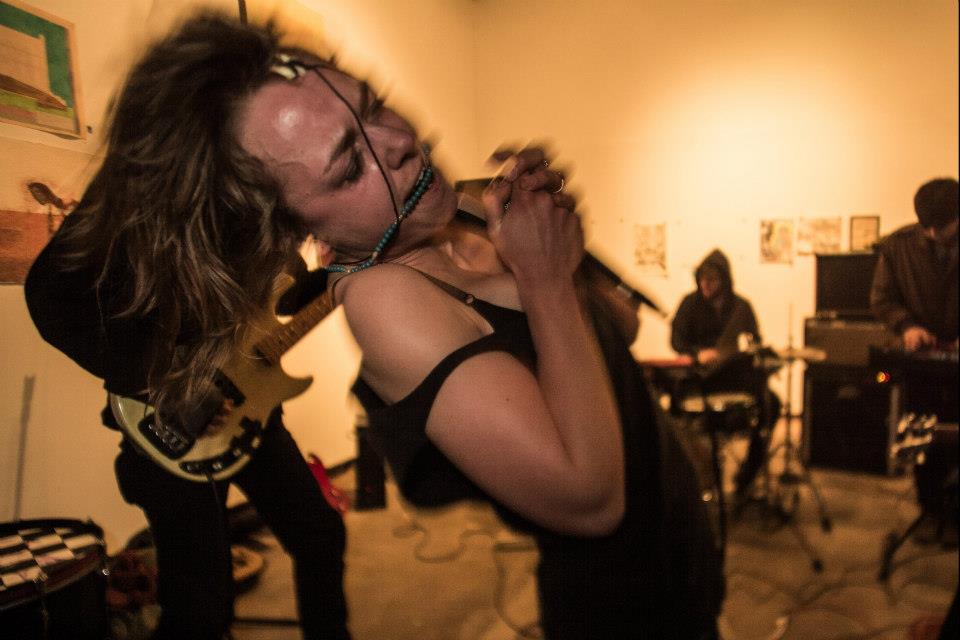 John Toohill: Kassie! Hi! Sorry to start this interview so late. Irene and I were drumming up some good voodoo for the show this weekend while down in New Orleans. Which brings me to my first question: Do you believe in ghosts and have you seen some lately?

Kassie Carlson: Of course I believe in ghosts. We saw a few when G-Toss was in Upstate NY recording. I guess it all started when we were practicing and I saw a white dog on the second floor. I didnt say anything until later and then Pete goes, “Oh yeah, I’ve seen that dog,” very nonchalantly. The next morning, Phil, our new bass player, was sitting at the table all wide eyed and crazy looking. He came up to me and said “Hey man, did u hear anything weird last night?” And I was like “No whats up?” Apparently he was sitting there drinking a beer and getting ready to go to bed and heard a faint music playing. He couldn’t figure out where it was coming from. He put his ear close to the record player, the radio, walked by peoples’ rooms… nothing seemed logical. He sat down at the table and tried to forget about it. When he almost had, three faint knocks tapped on the window. He jumped out of is chair and peeked out the window, and it was just pitch black out there. Nothing was there. It gets really dark out there because the cabin was in the middle of nowhere. When there is no moon, it’s almost like a liquid black.

One night we were going for a walk and I was a little slow getting out the door. I was running out the door trying to catch up with the boys. I thought they were right in front of me, and I thought I felt their presence or something, but they didn’t answer. So I said “Hey stop trying to scare me” and I turned on my light and no one was anywhere around me. They were way up the road.

JT: Wild! I’ve seen your band live a couple of times. I kinda compare it to seeing a ghost. You know it’s like when I try to explain it to someone but they won’t really get it until they experience it themselves. It was weird, unreal, and kinda scared me, but I felt almost possessed to move because of it…I also had a raging erection after. They say fear and sexual arousal are pretty close in your brain chemically. Do you guys draw influence from anything non musical in particular? You fuck with witchcraft, drugs, or zoos or anything?

KC: I try to meditate for a minute at some point before we play, I guess to stretch out and be in the “now.” Or something, I dunno. Drugs sometimes, I guess, but only the positive productive ones.

JT: What are the “positive productive ones”? Like Ricola drops? Or Pedialyte? You’re not from Florida originally, right?

JT: I’ve had your potato chips! They are wonderful! Speaking of snacks, I’m into salty ones, not so much sweets. Maybe a few Swedish Fish or can of coke when I’m turbo hungover in the summer. What kinda gribnage is floating around the van with you guys right now? Anyone into real nasty stuff like Sno Balls or Good & Plenty?

KC: Pete really likes circus peanuts. We just finished off a bag of Swedish Fish in the car on the way to Wesleyan College. Normally when we have Sam P. driving us, he buys us a bakers dozen and at least 4 Reese’s eggs. He also likes to stop for a chicken sandwich or two every so often.

JT: Right right! Is Sam coming? Love that guy. (I’m not counting that as a question)
Last question: Since the blog is gonna just link one of your sweet jams at the end of this post to actually showcase to people what’s real and this interview is mostly just us bullshitting for good times, let’s get serious (not really) for one. Why do it? Why keep playing wild, non-commercial music, and constantly doing DYI touring? Don’t you know you’re just gonna go broke, not have a job or probably a boyfriend/girlfriend every time you get home? You people are crazy!

KC: Its super hyper real and the only thing that makes sense right now. I do everything for Cheburashka.

JT: That thing is cute as hell. I feel ya. See you all Sunday!