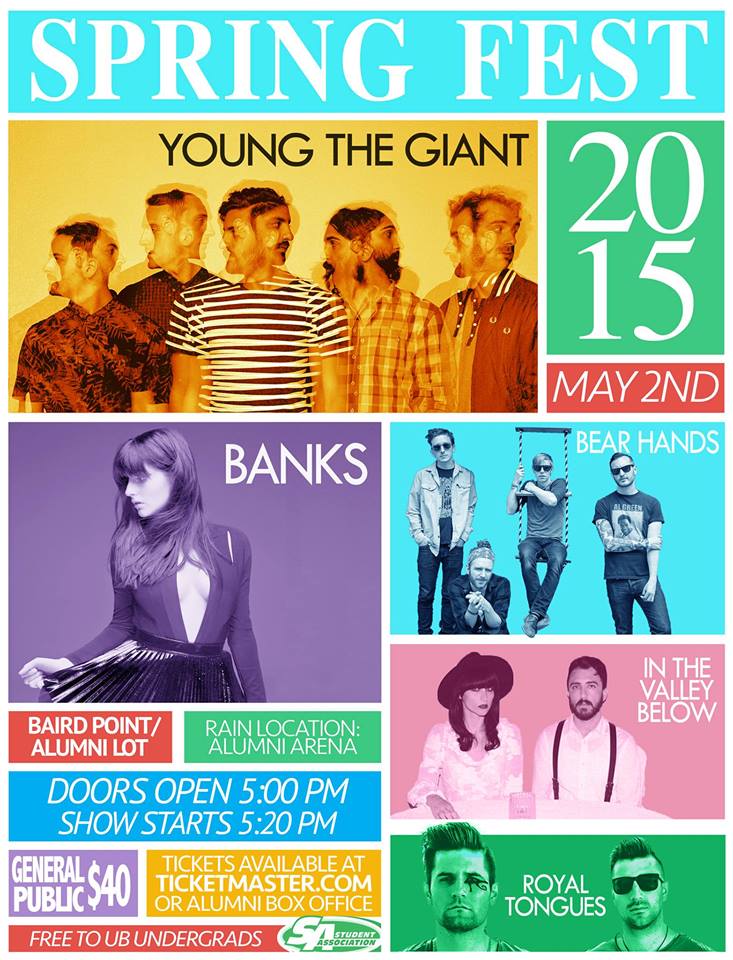 With the semester’s end in sight for area college students, and the generous blanket of warm rays we’ve been receiving lately, today is nothing short of an ideal setup for UB’s Spring Fest. This year’s event, sponsored by Alternative Buffalo 107.7 and held at the University at Buffalo’s Baird Point, is jam packed with headline-worthy artist after another.

Cali natives and seasoned alt-radio vets, Young the Giant, are slated as the main act of the night. If you were able to catch the band at Canalside last year, you can most likely vouch for the energetic punch their set packed.

Also in tow for the evening is sultry electro-pop singer Banks, whose debut album Goddess (released only last September) has made a lasting imprint on alternative charts worldwide. In the Valley Below shares a similar dark, synth-infused pop sound to Banks, but brings a fresh male/female vocal blend to the mix.

Bear Hands, who also made an appearance at Canalside during last year’s Kerfuffle, are most popular for the hit singles “Agora” and “Giants” — the kind of songs that will nestle themselves in between your eardrums for weeks at a time if you catch the smallest glimpse of them on the radio.

Royal Tongues are a Buffalo born band that are steadily rising in popularity among the indie pop crowd. Their high-powered pep will lend itself well to the rest of the lineup.

As of this morning, tickets are unavailable on Ticketmaster.com, but they may still be for sale at the Alumni Box Office. Tickets are $40 for the general public and doors open for the show at 5pm. Check the Facebook event for more information.