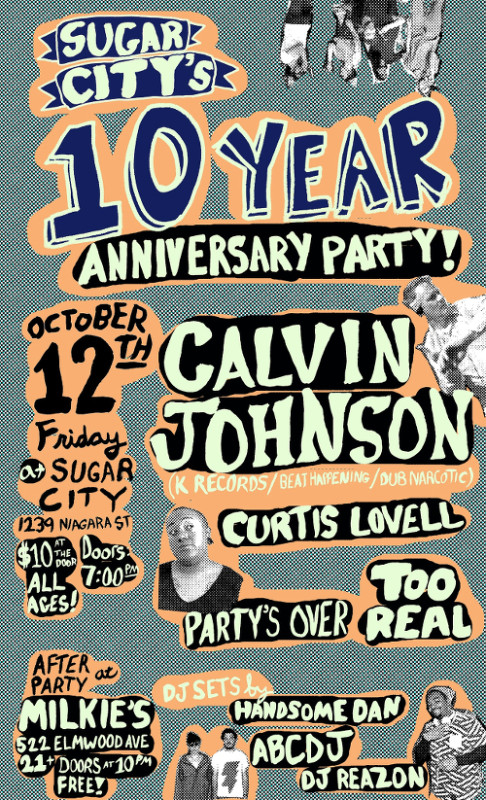 Sugar City, the city’s only remaining DIY arts and performance space is celebrating ten years of existence in both the material and immaterial worlds tonight with two parties, an excellent lineup featuring friend of Sugar City, indie rock hero Calvin Johnson, and you beautiful people. It’s been quite the adventure for Sugar City since it’s grassroots founding back in 2008, existing first in the hearts and minds of it’s early organizers and supporters, then in a magical physical space on Wadsworth at the base  of Allentown, where magical things happened… before being gentrified out and/or beset upon by unfriendly forces, depending on who you’re talking to.

Then it was back to the whole hearts and minds thing as Sugar City regrouped, staging events around the city and keeping the flame alive until an unsolicited grant from Robert Rauschenberg’s foundation put enough wind in their sails to land another wonderful space on Niagara Street, which is of course gentrifying around Sugar City as we speak and probably setting up a repeat of Buffalo history. But that’s for the future (yay), tonight is for celebrating the past, present, and the glorious idea of Sugar City itself, and they’re doing it with a show featuring Calvin Johnson (who played the last show on Wadsworth), the magnificent soul stylings of Curtis Lovell, the tight indie pop of Too Real and delightful Queen City Music Lottery survivors Party’s Over… and a free after party at Milkie’s!

The fun starts at Sugar City on Niagara Street at 7pm and runs to about 10:30pm, with a $10 cover before moving over to Milkie’s on Elmwood where you can dance dance dance to the sweet turntable ministrations of ABCDJ, DJ Reazon and Handsome Dan til 3am. Remember, Sugar City is volunteer run (i.e. nobody’s getting paid) and funded by the shows you put on there as well as connoisseurs of artisan sodas and the kindness of strangers, so please consider coming thru and throwing them a bone. Disclaimer: I’m one of the very unpaid volunteers over there so yes, please consider throwing us a bone so the Sugar City good times and the essential services it provides to both our local art and music communities can continue, hopefully forever.