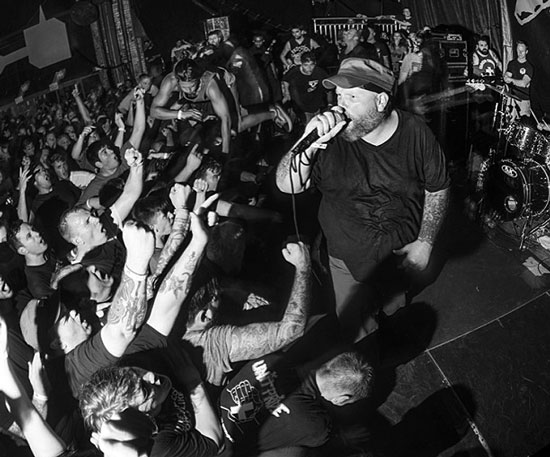 Several names pop up when you hear the term “straight edge” and have been involved in the hardcore scene for some years. The go-to’s are, of course, Minor Threat, who infamously coined the term, as well as Earth Crisis, the band that popularized the movement in the mid-90’s. Both excellent bands, synonymous with the label and the lifestyle it brings. There are of course many, many others though, few of which hold as heavy of a rep as Judge.

In the late eighties, Judge represented a militant version of the movement. For the NYC hardcore band, featuring members of the famed Youth of Today, straight-edge was all encompassing. No compromise, no exceptions. This garnered the band many fans…and just as many critics. When the group called it a day in ’91, their reputation was sound. They were heavy (often bordering on metal, but not quite) and they didn’t fuck around. EVERYBODY had an opinion on Judge.

Fast forward to 2013 when, to the excitement of many, Judge reunited for a couple shows in NYC. Since that time the band has been active, and will be playing Buffalo tonight, along with World Be Free, a hardcore super-group of sorts, featuring Buffalo’s own Scott Vogel (Buried Alive, Terror, Despair, Slugfest) and Joe Garlipp as well as members from Strife and more. Also on the bill are locals Black X, Longest War and Wreckage, making tonight’s show one of the must-see hardcore shows of the year. Waiting Room is the spot (6:30pm), and tickets are $25 at the door. DON’T SLEEP ON THIS ONE. Fever pitch is at an all-time high and this will surely be one of those shows people talk about for years to come! Straight-edge or not, the pit is calling….