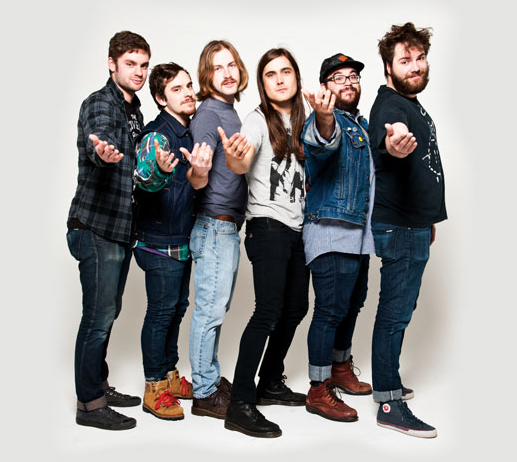 Without a doubt, party-punk act Diarrhea Planet is one of the most talked about bands rising in the ranks of the blogosphere. Another consensus is the off-putting band name, which some dismiss before giving them an actual listen. I, for one, think the band name sounds like a writer for a failed 90’s teen comedy came up with fictional grunge band playing a high school prom. “Like… Diarrhea Planet are totally playing prom. Duh.”

The band’s sound is big, almost like if you took the good parts of Weezer, with the energy of Andrew W.K, and Nashville-style of labelmates Jeff the Brotherhood. To boot, Diarrhea Planet’s live show is incredibly engaging. This past month, I caught them in Brooklyn’s soon-to-be-closed DIY space Death By Audio, where I witnessed the sextet crunch itself onto a tiny stage, pump out jammers to a sweaty, constantly crowd surfing audience intent on pulling down the drop ceiling meanwhile wishing numerous band-friends “Happy Birthdays.” It seems like there will only be one other band on the bill at press time, South Buffalo’s Pavementy-Dinosaur Jry Aye Karou. I’m really encouraging you guys to head out to this, as it may be one of the best live shows coming to Buffalo in 2014. 8pm doors with a $12 cover.