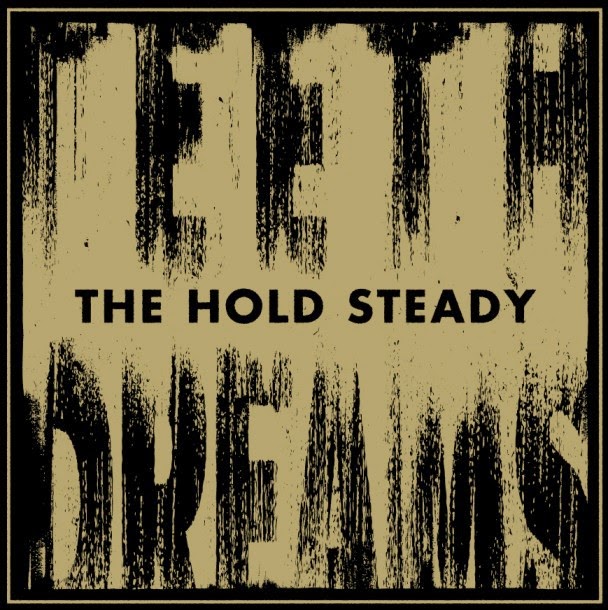 The Hold Steady, as their name suggests, have always been consistent. Each record contains the same classic rock bravado, the same gritty tales of skaters and punks, druggies and barflies, “kids at shows” and their “scene leaders.” Jesus is found and lost, beverages consumed and vomited, girls hooked up with then abandoned. And yet, through all the recycled imagery, frontman Craig Finn keeps his storytelling gripping and sympathetic, caring deeply for the life-hungry characters he creates as they binge-and-purge their way through the city’s slimy little sins.

Teeth Dreams, a more straightforward affair than some of their records, is no deviation from the Hold Steady’s concentrated vision. Although Finn has stated that the album’s title was inspired by a David Foster Wallace passage, Jack Kerouac still serves as his main literary muse. Soaked in booze and blood, the songs lift themselves up from the barroom floor to reach toward the flickering light of salvation.

“I Hope This Whole Thing Doesn’t Frighten You” kicks the album into gear as a boyfriend introduces the new girlfriend he’s brought home for Christmas to a few unsavory connections he’s failed to mention. “Spinners” then rocks a little harder, chronicling a single woman’s misadventures and deluded mantras (“Salted rims and frosted mugs / It’s a big city, there’s a lot of love”).

The title’s teeth dreams appear on “The Only Thing,” where the song’s speaker obsesses over a woman “sleeping at a storage space by the airport.” Her accommodations are an improvement over “The Ambassador” of the follow-up track, however (“There wasn’t much diplomatic there / The space between the skin and all the blood”).

D.F. Wallace gets referenced again during “On With the Business,” a song lamenting the “American Sadness” brought on by consumerism, in which the speaker admits he “said a couple things that probably weren’t technically true” during an apparent drug deal. “Big Cig” and “Wait a While” are both rousing odes to ill-chosen romantic entanglements, before things get more harrowing on “Runner’s High,” a track that apex’s amidst a near-death experience.

“Almost Everything,” a reverb-drenched acoustic dime leads into “Oaks,” the Hold Steady’s most expansive song to date. At nine minutes in length, the album finale stretches beyond the city limits toward “mountains all covered in oaks… trees as they turn into smoke.”

“Our minds are the windows / Our bodies are screens,” concludes Finn, “We scratch / We scrape / And we dream.” If the Hold Steady continue to release such solid work, may they scratch and scrape and dream for many records to come.