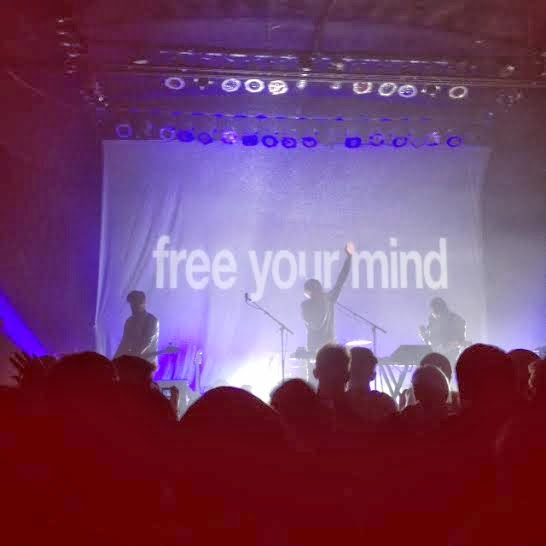 From the moment they took the stage with a vocal excerpt of Rhythm Control’s classic track “My House” playing faintly, it became clear that Tuesday night’s Cut Copy show at the Town Ballroom would be yet another memorable and celebratory performance from the Melbourne synthpop band. Touring in support of their latest record, Free Your Mind, co-produced by Fredonia based studio maestro Dave Fridmann, the band showed an effortless ability to incorporate house and Madchester influences into their eclectic, pop oriented sound.

Opting to play the album’s spectacular title track early in the set, “Free Your Mind,” was projected behind the band in Facebook’s signature font before a blue background, making for an interesting juxtaposition and provoking statement on independent thought in the digital era. Given frontman Dan Whitford’s background in graphic design, the show had a strong and concise visual element that ranged from hypnotic black and white spirals during “Let Me Show You” to psychedelic color blends during “We Are Explorers.” Combined with lustrous light coordination and a highly charismatic delivery, Cut Copy were able to create a warm, uplifting atmosphere on a cold Buffalo night as they captivated the audience with each drum solo, cymbal crash, breakdown and buildup.

The set also included cuts from their 2008 album, In Ghost Colours, and 2011’s Zonoscope, with standouts like the infectious, riffy “Lights and Music” and the acid-house stylings of “Hearts On Fire.” After briefly leaving the stage the band returned for a two song encore that featured “Walking in the Sky” and the always affecting “Need You Now”, whose yearning chorus set to majestic oceanic scenery was a powerful way to end an impassioned performance. On Tuesday night, Cut Copy were able to prove the ability purposeful pop music has to transcend age, race and gender and bring people together for a damn good party.