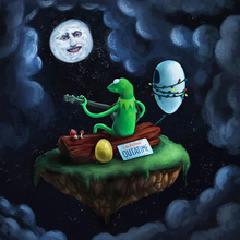 Mostly everyone understands the idea of a sample or snipped included in a piece of music. The point, if the musician gets it right, is to relate the clip to the thematic vibe of the music or lyrics. Many hip-hop artists do this successfully (Wu-Tang Clan, Aesop Rock) as do electronic musicians (Ratatat, Ott). One unique thing about Australian electronic artist Pogo is his usage of strictly taking samples from movies, television shows, and film scores to create a new composition. He is certainly a master at collage, and perhaps a Pop artist.

A few years back, he created a famous mash-up of the score of Alice In Wonderland simply titled “Alice.” The YouTube hits skyrocketed, and I even remember stumbling upon the shocking goodness of the piece. With his latest release, Younghood, he doesn’t stray too far from his down-right trippy instrumentals. First track “Kermit Clouds” samples the voice of Kermit The Frog alongside a light, floating synth. He says, “What do you think? Well, it’s not the kind of music that Willy Shakespeare used to right.” Pogo uses the “hmmm’s” of Kermit’s dopey tone as a downbeat, passing through subtle flute chimes and percussive action.

The beat from “Time Machine” rolls along in a slower, lackadaisical manner. Pogo focuses more on meshing voices together to build into a flowing drop. Within the distorted synthesized voices, you can hear a “Stella!” and “Just would not have met your father.” Fast drum snares clinch the close. “I Want” is on the same level as “Time Machine,” but uses a wading kick drum to bring the tune forward. “Nicey Nicey” situates itself as the strangest album on the track. The vocal that leads the song sounds like it’s underwater, singing “nicey nicey zoo zoo – look at the sky!” in small, choppy clips. Working in the background is a downtempo house instrumental that should be playing at a pool bar.

Closing out the album is “Mix-E,” a track that begins with a heavier drum snare and waterfall trickle. Two minutes in, the song breaks down into a flatter, scarce thin percussion that fades into a gentle flute melody. Younghood is another solid piece of patchwork from Pogo that is not as vibrant as albums before, but holds its own as a dance-worthy addition to your playlist.