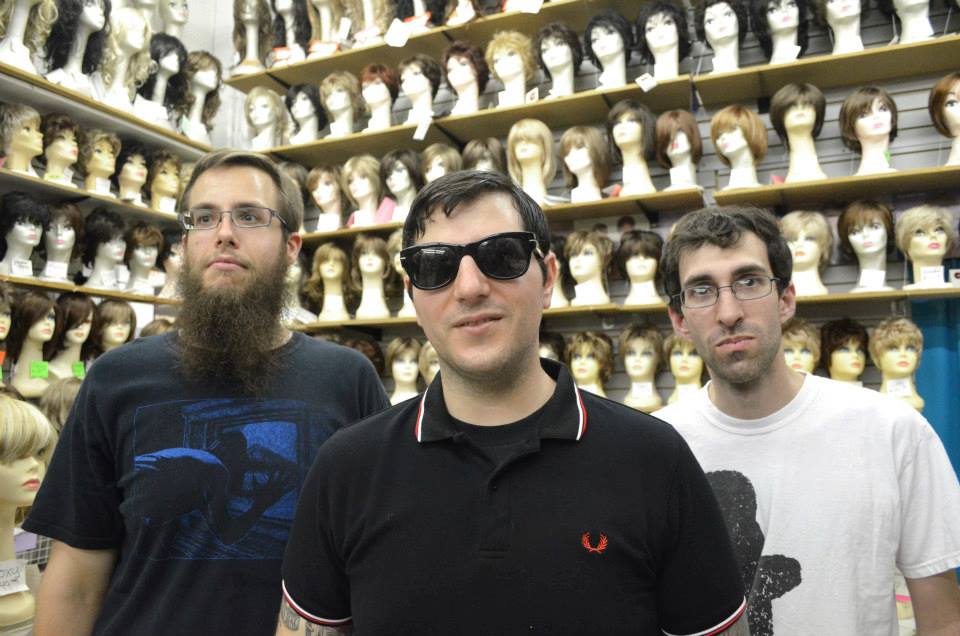 If you happened to make it out to buffaBLOG’s Herd Fest this past weekend, you may have heard something about a little band from Philadelphia called Psychic Teens. Now if you were fortunate enough, you actually got to catch their set at Allen Street Hardware, as part of Sugar City’s showcase. And if you missed their set, well, then shame on you.

Needless to say, the brotherly love trio (singer/ guitarist Larry Ragone, bassist Joe Decarolis, and drummer Dave Cherasaro) made an impression on Buffalo this past weekend, brandishing their own brand of gothic, art-punk with some post-punk tendencies. As one attendee said, “I just got blasted by Psychic Teens,” while extending his jaw attempting to make his ears pop. “Did you catch them?” he asked me. However before I could answer, partly due to being unable to hear him, he said, “I totally forgot my plugs. They are definitely the loudest band I have seen in a long time.” Psychic Teens have been breaking hearts and smashing ear drums since 2010, with two LP releases under their belt: 2010’s Teens and its follow up in 2013’s Come. I recently had the chance to sit down and chat with the group.

buffaBLOG: I really dig your bio from your bandcamp page: “Psychic Teens are regular adults from Philadelphia, that sounds like that time that you spotted your creepy metal head brother at 80’s night.” So in that situation, are you at 80’s night as well?

Psychic Teens: We are. In the late 90’s and early 00’s, this nightclub in Philadelphia called Shampoo used to have an 80’s night on Wednesdays. However, in the main room, it was goth/industrial night and at midnight there was something called “Midnight Mosh” where they played some harder edged guitar stuff like Ministry, KMFDM, Fear Factory, etc., and people in fishnets and boots push-moshed and rocked out. When we wrote that bio, I always pictured a 20 something college girl there with her friends in the 80’s room dancing to Simple Minds recognizing her younger brother who snuck out of the house to mosh to Sepultura.

bB: You guys took part in buffaBLOG’s Herd Fest this past weekend, playing Sugar City’s showcase. How was it?

PT: It was pretty great. Everyone was really nice and welcoming, and we got an awesome crowd response. The folks running the show made sure everything went smoothly, and made it a super easy and fun experience.

bB: Psychic Teens, was ‘the’ band everyone was talking about on Saturday. .

PT: That’s pretty crazy and flattering. It’s great to travel fairly far from home and have that sort of response.

bB:  I ran into at least four different people who said ‘that was loudest band I have ever seen.’

PT: Between our maxed out volume and strobe lights, we make sure that if you are in the same room as us, you are paying attention. Within the first ten seconds of the set, people pretty much get the picture that social hour is over. I could tell that most everyone at the show was kind of taken by surprise when we started how loud we were.

bB: How did you guys get involved? Had you guys played in Buffalo prior to Herd Fest?

PT: Andy [Czuba] from Sugar City had booked us last year at the Flesh Temple and it was a great time. We had remained in contact with him as well as John [Toohill] from JOHNS?Alpha Hopper who is pretty much the man. We were excited to be invited back up to play Herd Fest so we booked our whole weekend tour around it. Buffalo once again did not disappoint.

bB: You guys have played a few festivals similar to Herd Fest this year, such as MACRoCk Music Festival. How did Herd Fest compare in your opinion?

PT: We did play MACRoCk this year for the 2nd time. Herd Fest had kind of the same feel, with a lot of the town gathered at the shows and showcases all around. MACRoCk doesn’t seem to have as much of a locally centered focus, though. Its rad seeing a town get together and support the bands its got.

bB: You guys are from Philadelphia. How does the music scene in Philly compare and contrast to what’s going on here in Buffalo?

PT: We can’t really speak on the Buffalo scene as a whole, but it seems like Sugar City has the lock down on the DIY scene. In Philadelphia, we have a few DIY organizations who book in all sorts of different size/kinds of places too. Much like Buffalo, there is crossover between the music scene, bar/restaurant people, record stores, coffee shops, etc. That type of collaboration really strengthens the legitimacy of punk and DIY culture throughout our cities.

bB: In an interview with Spin Magazine last year you said, “We’ve attracted a lot of… weird teens on Twitter,” adding, “Maybe they’d be disappointed if they actually heard us play.” Has that ever happened? Someone who follows you on twitter that came out to a show to see you play?

PT: When we first were starting out, our Twitter handle “PsychicTeensNetwork” caught the attention of the subculture of “actual” teenage psychics and/or people into that type of fiction. So we got followers who really didn’t realize we were a band. We would joke “what if one of these people showed up at one of our shows thinking it was a teenage psychic meetup?” We are still not sure if we have turned any real psychic teens onto our music.

bB: Austin’s Ringo Deathstarr says they can’t stand the term ‘shoegaze’  that reviewers in the past have lumped you guys into that genre. Does the term bother you at all?

PT: People are desperate to lump us in to some sort of genre and shoegaze isn’t a bad one. There are definitely elements of shoegaze in what we do but we are definitely not a shoegaze band. Our guitarist/singer wears sunglasses all the time so its impossible to tell what he’s looking at when we play.

bB:  When it comes to lyrics, there are a lot of bands that feel the need to lay everything out, so there is no room for interpretation. However, there seems to be a shift happening, and letting fans decide what a song means. Do you have any thoughts on that?

PT: We prefer to let the audience interpret for themselves. Once the music is released and experienced, the writer’s intent doesn’t really matter much anyway. It’s all subjective. A piece of art or writing only having one set meaning seems horribly boring. Don’t hold your breath for “Psychic Teens: Storytellers” any time soon.