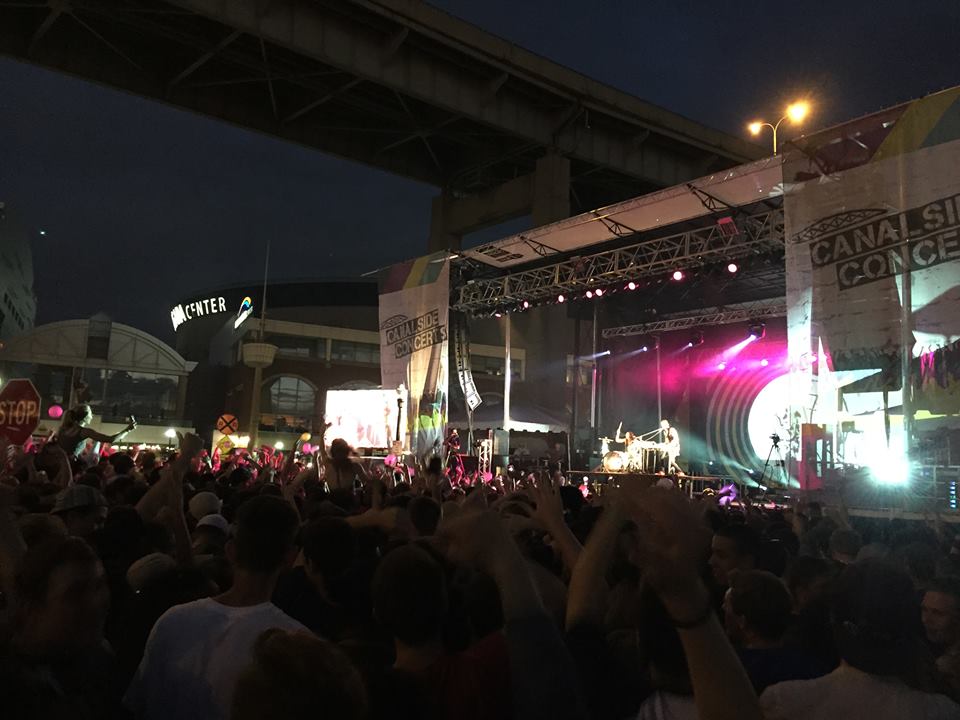 Well folks, congratulations. We did it. It’s been building for years, and it’s certainly been talked about a whole lot, but Thursday night it sure felt like the much ballyhooed “new Buffalo” was real, and it was awesome. The first Thursday at Canalside of 2015, which featured Brooklyn duo Matt & Kim, new local heroes Made Violent. and Boston’s Bearstronaut, was something brand new for Buffalo, an immediate victory for the youth experiment with this year’s edition of Canalside, and something close to a dream come true.

The Millennials and 20 somethings were truly in the ascendency Thursday night, with many attending their first Thursday at Canalside judging by the rampant confusion about the cash for tickets currency exchange concept that has been in place for the last few years. Drawn by a bill featuring decidedly younger artists, they were there to kick it out, and all three bands held up their ends of the bargain. Bearstronaunt got things started right with an urgent, Cut Copy style synth sounds and infectious 80’s beats that got the crowd up front dancing with a highly impressive opening set.

And let’s pause for a moment and talk about the Millennials and teenagers who were everywhere Thursday night. There’s been a lot of grousing about the teenagers at Canalside last week, and as the resident geezer on staff at buffaBLOG, I just want to say “WHATEVER.” I remember when Thursday in the Square were weekly bro-stocks for 20 somethings indifferent to the generally ho-hum music to get sozzled on draft beer at. These teenagers were there to dance, and dance they did. The teens and other Millenials at Canalside were also a pleasingly diverse bunch, with black, white and everybody in between showing up to be cool and get down. If it’s a choice between diverse, dancing teenagers and drunken bros, I’m going with the teenagers. Anyways, most of that grousing was because the teenagers were in your spot, but guess what old, you’ve been replaced. Get used to it.

If Matt & Kim didn’t totally kick ass, local boys Made Violent might have almost stolen the night with the first true introduction to its hometown as the trio played its biggest WNY crowd yet. And what an introduction it was: all three blokes in Made Violent were utterly at home playing to a huge crowd that gradually and enthusiastically caught on to just how excellent this band is. Cranking out stadium ready jams off their terrific EP as well as new songs crying out to be recorded,  Justin, Joe, and Rob absolutely owned the crowd, which lustily ate it all up, with mosh pits forming, crowd surfers, girls on shoulders and pop topping… like at a big time rock show.

The crowd, gratified by being blown away by the local opening act, was completely with Made Violent who didn’t need to butter up the audience, but in between jams and shout outs to Joe’s Deli, frontman Joe White made a point of linking his band’s ascent and the rebound Buffalo is currently on. With the stakes raised and the huge crowd with them, the local boys crushed their closing song, the name of which escapes me because I was caught up in the throng of humanity rocking out like it was last night on Earth. Yes, Thursday at Canalside, the long running free music fest and drinking expo, was an honest to goodness, full on banger. At last.

That joyful, insane and new to Canalside energy carried over to and was amplified by Brooklyn duo Matt & Kim, whose urban, hip-hop inspired and infused art pop was the perfect fit for the young and diverse Canalside crowd keen to break it down, and for the crowd in front of the entire stage it was move or be moved for the duration of their set. I have never seen that at Canalside or Thursday in the Square. This was brand new for Buffalo, a city traditionally divided by race, class, and a multitude of other barriers, and it was truly awesome.

Young, old, white, black, straight, gay, etc etc etc were all there getting free at Canalside Thursday night, at least it sure felt that way… especially in the beer, food, and port-a-pottie lines, which also contributed to the some (most) of the grousing. These things will need to be sorted out by the Thursday at Canalside party committee, if nothing else to bring in more money, which are not bad or unsolvable problems to have. And it’s hard to say whether the crowds and energy will be like that throughout the summer (I for one am intrigued by what crowd awaits Spoon at the end of the month), but at Thursday at Canalside last week I think we got a glimpse of Buffalo’s future, and it was beautiful.