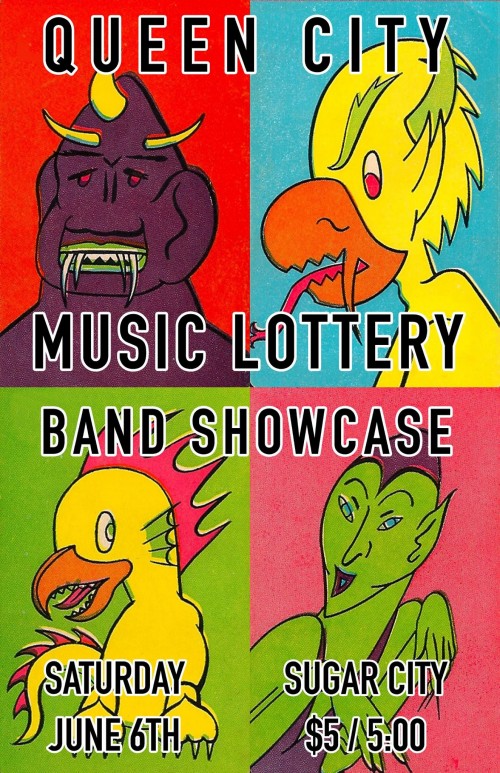 The Queen City Music Lottery is an exciting experiment  that tests some of the myths we hang onto about bands, such as that they are made up of organically formed people who share deep personal bonds. Obviously, we know this isn’t actually the case but on some level, I think we unconsciously subscribe to this. This is why the Lottery sounds so intriguing. What happens if you assemble bands via lottery, what kind of random combinations of people does it create and what kind of music can they make in a short time?

As I mentioned, the Queen City Music Lottery is Sugar City’s annual event where bands are assembled by drawing names out of a hat. These bands can be made up of long time musicians or people who have never picked up an instrument in their life, the bands are assembled and given a few months to coalesce. Tonight, these bands will be performing at Sugar City.

Starting at 5pm, the showcase features a festival sized lineup of newly formed bands: Elvira, HOTMediummild, Pups, Miniature Van Damme, 3.14159265358979323846264338327…, ##, Womb Temp, Bingo Ringer, Horseradish, and Karl Palidino & the School Bored. What these bands sound like is anyone’s guess so head down to Sugar City to find out and see what happens when people stop being put together organically (friendships, ads on a bulletin board, etc.) and start being REAL.