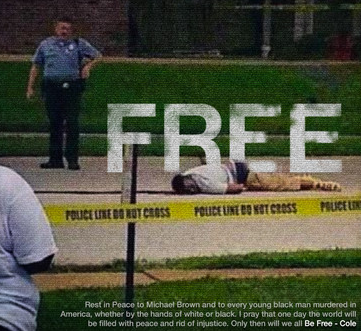 J. Cole is the first big activist coming from the world of hip hop regarding the tragedies outside of St. Louis. This past Saturday, an unarmed black teen was shot to death by a police officer. Facts are muddled. The police say 18 year-old Michael Brown was assaulting an officer, reaching for his gun. Witnesses say Brown was running for his life from an officer who started the interaction with his gun drawn threatening to shoot. Some people of Ferguson reacted honorably with events like candle-light vigils, but others complicated the problem recklessly looting stores and vandalizing property of their own community, a community that already had big-enough problems at hand. It’s a tricky issue. Four nights of clashes between police and protesters followed, including the use of rubber bullets and tear gas. In the last couple days, tensions have settled and it looks as though the community will try to move towards normalcy.

Over the last week, everyone has had something to say about the events in Ferguson, but J. Cole was the first rapper that expressed his thoughts in something more than a tweet. Hip-hop has been predominantly black for the entirety of it’s 40 years. It’s a culture a lot of black people grow up with, and artists like Public Enemy started the tradition of using hip-hop to express mistreatment and prejudice that they’ve experienced. Artists of all genres have a voice that can travel farther than the regular person. Their words seem more important, more representative. In “Be Free,” the song J. Cole released early this morning, he speaks for the people of Ferguson, and for the people that feel society is at times pitted against them.

Rappers like Pharoahe Monch, Ace Hood, King Los, and Game released tracks soon after the Trayvon Martin incident. J. Cole is the first major artist to release a song, and it’s release may be the spark that starts a chain of reaction songs from hip-hop artists. He is a heavyweight of music right now, and it’s easy to wonder if other heavyweights like Kendrick Lamar, or Drake, will voice their emotions on the Ferguson events through song.

Check out the song below: