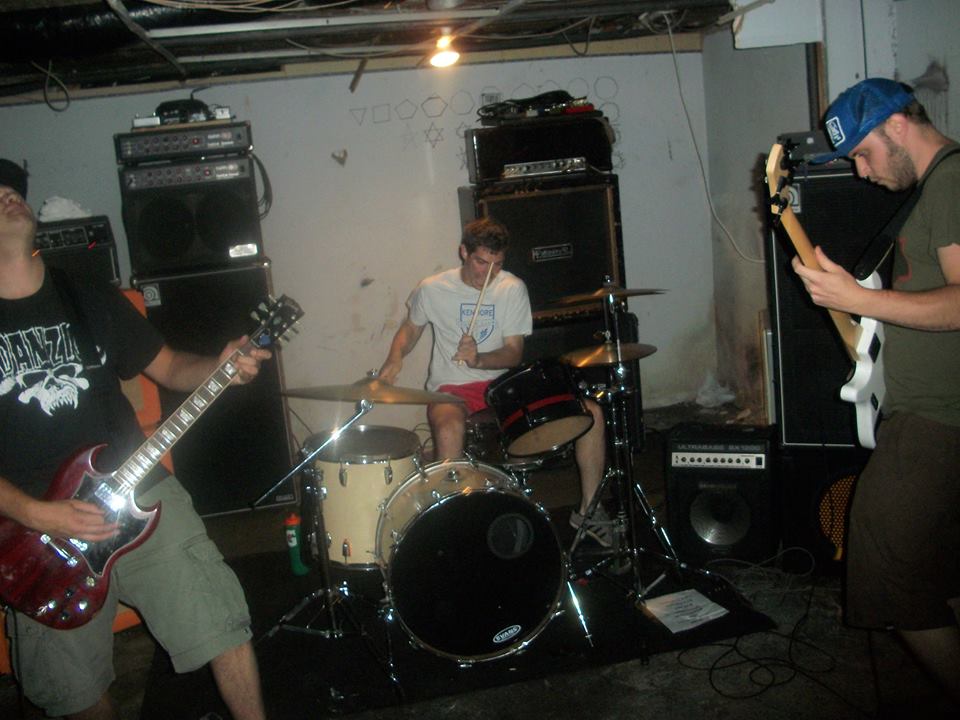 Editor’s Note: Fresh Meat will be a periodical, in-depth look at some of the area’s freshest bands. For the first installment of the series, we focus on the instrumental trio, HUNS.

For HUNS, it’s all about the improv, and no, I’m not talking about the comedy club. Improvisational music is usually something that you correlate to jazz, even though there have been a few bands who have thrived on it, such as Fugazi, Mogwai, Kyuss, and Clutch.

“We record everything we do right here,” drummer John Neiss says, pointing to a shelf of stacked recording equipment. The shelf is nestled into the corner of Huns’ tiny rehearsal space in downtown Buffalo.

“We go back and listen to it,” adds guitarist Brandon Schmidt.

According to Schmidt, the biggest obstacle is keeping Neiss engaged.

“He is very punctual when it comes to time.”

An interjecting Schmidt adds, “He gets bored easily.”

HUNS will be heading into the studio on August 30th. They will be recording with Mr. Ski-Mask at his Pumpkin Patch studio.

“We’re going to do it in two waves,” Schmidt adds. “Maybe like five songs each.”

HUNS are also slotted for two shows: September 12th at The Hoyt House and October 9th at The Lair on Niagara Street.

What really makes HUNS stick out in the eclectic unicorn tribe that is the Buffalo music scene is their lack of a vocalist.

“You think you have to have a singer,” Schmidt explains. “You think you need to have someone throwing out the human voice at people. But people were all like ‘No, just do it.’ So… we think we might get a singer, but who knows.”

Neiss chimes in, “I think the next addition would be something melodic like some keys.”

HUNS aren’t big on labels or genres when it comes to describing their music. The heavy instrumental trio are new to the Buffalo scene, comprised of brothers Schmidt and Neiss along with bassist Jake Whitefield.

When asked to describe Huns, a shit-eating grin dances across Neiss’ face. “Oh, I’ve got it written down here somewhere,” as he jumps behind his drum kit and shuffles through a stack of papers.

Schmidt and Whitefield, snicker to themselves.

“Oh, here it is,” Neiss says, finding the needle in the haystack. “Instrumental rock, punk, cock classics of the nine-nine and 2000’s, that’s our genre.”

He puts the stack of papers away.

“If I had to describe it, I’d say metal from the 80’s that didn’t suck. The word I have been using is instrumental.”

In my opinion, the best way to describe Huns would be barbarian rock. Imagine barbarians sitting around a campfire swilling their mead and sharpening their blades.

What would they be listening to? The answer could be HUNS.