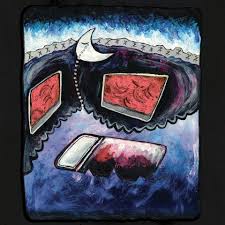 I am afraid that my fingers will have kelp on them from my time spent in the sea. The humid tendrils of wind make me crave a fresh, cold drink. Immersed in the salty water, I hear an echo of a glorious sound, coming closer with each vibration. After I raise my head above water to breathe in air, I am relaxed.

Floridian quintet Hundred Waters’ music can be described as Aphrodite music. Singer Nicole Miglis’ voice is a luminescent, deep cry, soaring above the production that Trayer Tryon, Paul Giese, Zach Tetreault, and Allen Scott compose from found sounds and precise electronic instruments. Their first self-titled album, Hundred Waters LP, was released on the Elestial label in 2012 and heard by Skrillex, who immediately signed them to his label OWSLA. Say what you want about Skrillex, the guy has taste.

Two years have flown by and their latest release, The Moon Rang Like A Bell, shows their continued oceanic evolution of beautiful, ambient sound led by peaceful lyrical direction. Opening track “Show Me Love” features Miglis sing-song speaking with a light voice changer, “Don’t let me show ugliness / though I know I can hate / and don’t let me show evil / though it might be all I take / show me love / show me love.” The soft essence of this lead-in is contrasted by “Murmurs,” that begins with a repeated “I wish you” above striking dolce piano chords and instrumental space-gulps.

“Cavity” comes on with a rush of drum-echos and pats that are gently surrounded by a miraculous, aching undertone. The words ebb along the melancholy tone, “you make these feelings go away.” Hundred Waters knows how to create a musical fabric that alleviates the unnatural stress and anticipation I get before listening to a more ambient album. Sometimes the sounds take too long to build and become boring, or only focus on one level of interest. Songs like “Out Alee” that sprinkle florid bits of high-pitched faerie synth and “Down From The Rafters” using a distorted fiddle to invoke a mythological folk aspect separates them from the catalog of droll associative music.

While The Moon Rang Like A Bell mostly runs on a down-tempo vibe, I wish that more songs like “[Animal]” and “X-Talk” would exist to break the trance state. Perhaps that is why they are placed toward the end of the work, but it somehow doesn’t quite fit the complacent aquatic atmosphere. “No Sound” returns to the barren and ever-changing landscape of the rivers, lakes, and seas. The subtle transference of sounds over an extended palette leaves the album into silence.