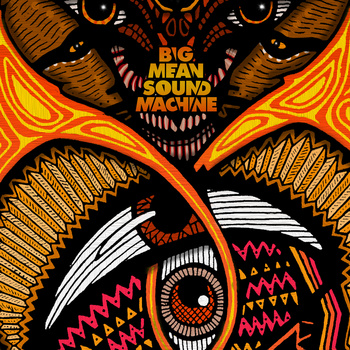 Angelo Peters may be the hardest working man in the Ithaca music scene right now. Between recently taking over the booking responsibilities at The Dock (formerly Castaways), as well as booking at the Loft, and current recording and production work, his 13 piece band, Big Mean Sound Machine, has managed to release its eighth studio recording, Contraband, through Angry Mom Records.

Peters and company get a little bit spacey on this one, and it works, as extra moog and synthesizer effects that accent the expanding horn sections fit in perfectly. Big Mean Sound Machine, who are known for elaborate percussion and horn sections, has managed to up the ante on Contraband. Where before the horns (Alicia Aubin -Trombone, Bobby Spellman – Trumpet, Jamie Yamen – Tenor Saxaphone, and Remy Kunstler – Baritone Saxaphone) were more of an accent, on this album, they are the centerpieces that drive songs like “Whoa Gosh” and “Sweet Tooth.”

Contraband isn’t as much as departure from 2012’s Marauders as it is a steady transition in the direction of progressive channeling. BMSM manages to throw every past, present and future jazz, afrobeat, and fusion great into the grinder and roll them up in one giant spliff, just to light it up in the front row at the Newport Jazz Festival.