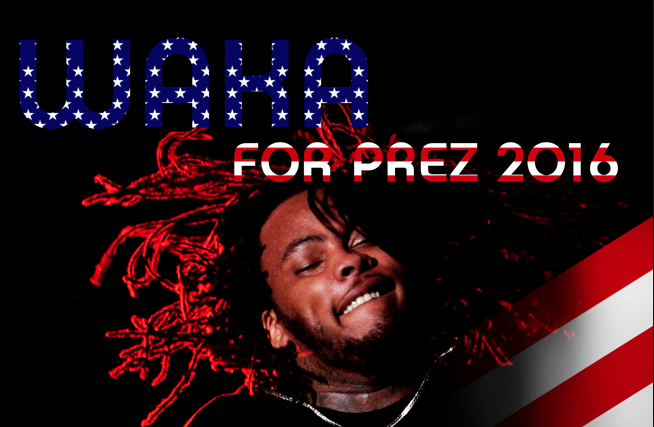 Over the past couple of days, “news” broke that Queens-born, ATL-based rapper Waka Flocka Flame is running for president in 2016. In a Rolling Stone video released on 4/20, Waka indulges in an L and runs through the driving points of his campaign. This includes the obvious mention of marijuana legalization and some more obscure topics like banning dogs from restaurants and people with feet over size 13 from sidewalks. The campaign continued again today with this video in which Waka collects signatures for a petition that will get him on the ballot

However sincere this campaign actually is comes second to the idea that as far as rappers running for president go, Waka Flocka is actually a pretty solid choice. It’s easy to look at the lyrics of a Waka Flocka song and call it trash, but lyrics have never been his thing. He himself has admitted that he’s not a very good rapper, but that his songs are fun and he’s just trying to create a party atmosphere. When he’s not talking into a microphone, Waka Flocka is tactful, engaging, and hilarious.

Waka’s stamp on modern hip-hop and pop music is massive, stemming from the 2010 pioneering album Flockaveli that brought trap rap music from the projects to the ‘burbs. For the past five years, Waka has been on an inadvertent public relations run that has made him one of the most likable artists in the musical world.  Late last year he posted on Instagram an ad looking for a new blunt roller. The position had a salary of $50,000 and he received 60,000 applications.  A few months later he refused to play a show at Oklahoma University after news of the racist Sigma Alpha Epsilon chant broke. Relatively early in his career he posed naked for PETA’s “Ink, Not Mink” campaign, and has been active in the animal rights community since then.

Waka Flocka Flame is an easy target for the press to make fun of. A tattoo-covered rapper blowing smoke into the camera isn’t what we think of as White House material. But he really does have a level head on his shoulders. Although weed was an integral part of his campaign, it along with errors in grammar and some of his outlandish plans are all the news outlets are talking about.

Amid the jokes about smoking trees and making his lyrics mandatory reading are moments of intelligent, if not profound thought from Waka. When asked what he’d do about women’s rights, Waka referenced his mother (a successful artist manager in her own right), saying ” My mother was my father and my mother,” continuing “[They] are pretty tough right now. It’s not a thing of rights for women, it’s more of a respect thing.”

Obviously Waka won’t and shouldn’t be our president, but there are plenty of worse people out there. His campaign videos are funny, hysterical even, but it’s important not to forget that Waka Flocka Flame is a social activist, critically acclaimed artist, and a smarter guy than people are giving him credit for.