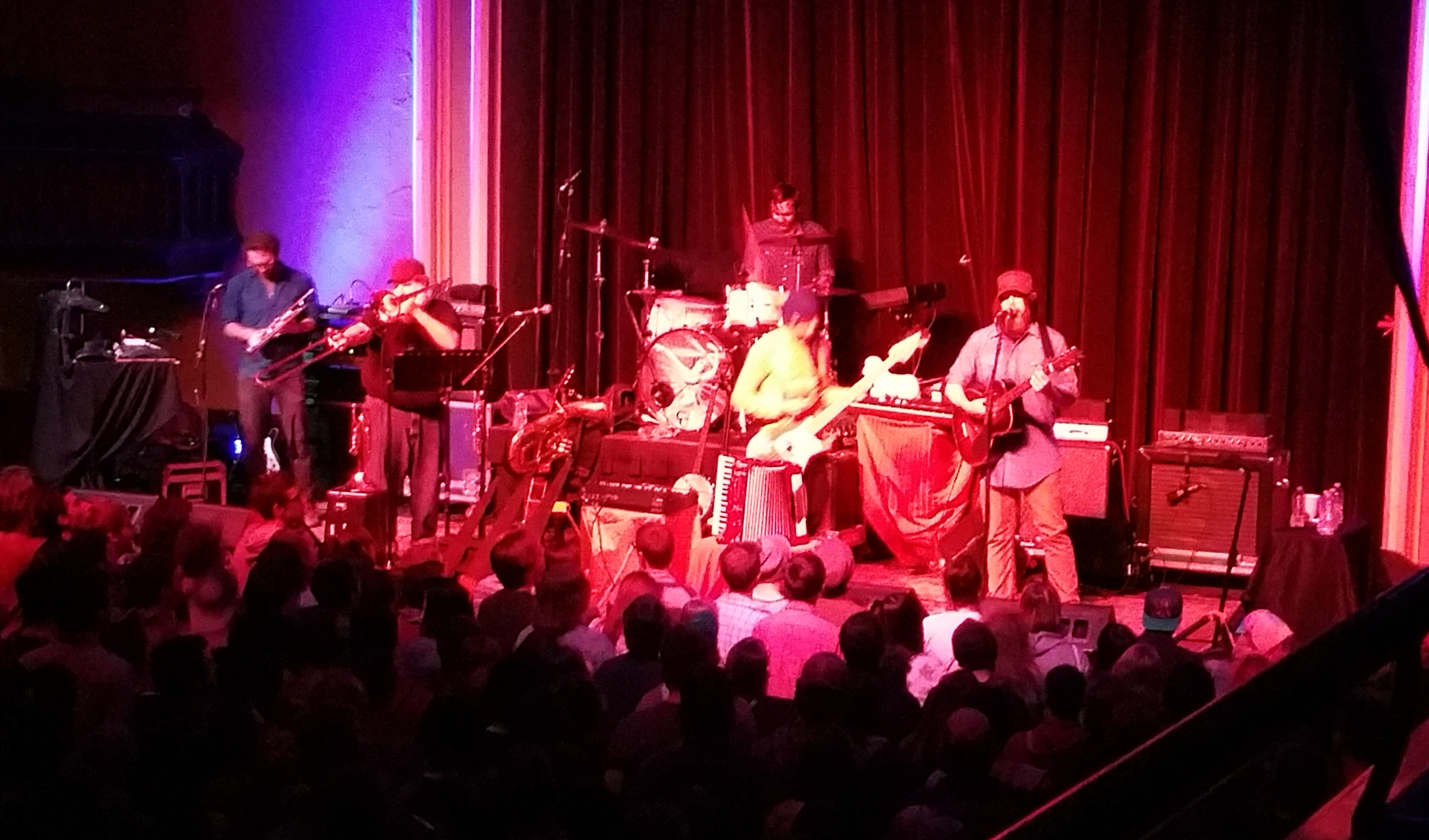 Neutral Milk Hotel is a band that needs no introduction; if you’re reading this, you probably know exactly what you clicked on and why you clicked on it. Either you were there, basking in the intimate glow of Asbury Hall, or, regretfully, you missed out on the sold out show and read now to salt your wounds.

For the very few of you who have no idea what I’m talking about, allow me to fill in the blanks. Neutral Milk Hotel, a band whose eclectic freak-folk stylings has amassed a mammoth indie-cred and a highly dedicated cult following—almost autonomously, I might add, as the group disbanded in 1999 and didn’t retake the stage until 2013—rolled through Babeville last night on what frontman Jeff Mangum is calling the band’s “last tour of the foreseeable future.”

Undoubtedly some heartrending news (as farewell tours tend to be) for fans of the underground neo-folk giants (oxymoron?), but all good things must come to an end. Though on a positive note, the show was nothing short of fantastic, as fully expected, a night enchanted by incredible performances of many of the band’s most beloved songs.

Psyche-pop ensemble Circulatory System, who are fellow associates of Mangum’s Elephant 6 recording collective, opened the night with experimental-tinged psychedelia. Though the band shares a lot of the same sensibilities as NMH—lavish instrumentation, 60’s pop influence, etc.—Circulatory System was very much unlike anything I’ve heard before. Maybe I’m sheltered. Howling as he stood slamming accents on his makeshift drumkit, lead singer and Circulatory System founder Will Cullen Hart embraced the weird and commanded an engaging set of loosely orchestrated psyche-folk. If I had to draw comparisons, I’d say it sounded like Deer Tick if they added cello and clarinet after returning from a peyote-fueled trip to a street-wide Quaker garage sale. I admired the band’s ability to brush off any expectation, and all things considered, could see why they made perfect tourmates with Neutral Milk Hotel.

After almost an hour-long intermission, during which I was able to drink two $3 cans of PBR (hmph.) and use the facilities downstairs in the Ninth Ward, Mangum finally took the stage. I could practically hang ten on the packed room’s wave of admiration towards Jeff when he walked out and wielded his guitar. Starting things off strong and solo, he careened into “I Will Bury You In Time,” from the 2011 EP Ferris Wheel On Fire, later joined by the rest of the band for a seamless transition into crowd favorite “Holland 1945.” The acoustics in Asbury Hall are seldom a disappointment, and I immediately noticed how the popular Buffalo venue had an undeniable synergy with NMH, brass tones sailing through the room in perfect union with Mangum’s unfaltering howl.

As NMH continued through it’s powerful set, which included a great variety of tracks from the band’s main discography (“King of Carrot Flowers 1, 2&3,” “Two-Headed Boy 1 & 2,” “In the Aeroplane Over the Sea,” “Naomi,” “Song Against Sex,” “Gardenhead / Leave Me Alone,” “Where You’ll Find Me Now”) among a peppering of B-sides and lesser known songs from earlier releases (“Everything Is,” “Ruby Bulbs,” “Snow Song”), it seemed as if the crowd came to a collective realization that it was most likely the last time we would see our cherished folk heroes in a live setting. That fact was easily forgotten while watching the band play – Mangum’s stoic stance and meticulous chord changes, bassist Julian Koster’s dizzying mid-song spinning, Scott Spillane mouthing every last word of each song in between his pitch-perfect horn arrangements, and drummer Jeremy Barnes’ frenetic yet fitting percussion pandemonium – all of it was as mesmerizing as it was beautiful.

But by the time Jeff started “Oh Comely,” the final song of their pre-encore 16 song set, it started to hit me. Initially saturated with unparalleled excitement, the air had adopted a bittersweet, mutual gratitude between both band and audience. It’s impossible not to appreciate the authenticity of a moment like that, and it’s a moment that will stay with me long after Neutral Milk Hotel has stopped touring.

Setlist
“I Will Bury You in Time”
“Holland, 1945”
“The King of Carrot Flowers, Part One”
“The King of Carrot Flowers, Parts Two & Three”
“Everything Is”
“Naomi”
“April 8th”
“In the Aeroplane Over the Sea”
“Two-Headed Boy”
“The Fool”
“Song Against Sex”
“Ruby Bulbs”
“Snow Song, Part One”
“A Baby for Pree / Where You’ll Find Me Now”
“Gardenhead / Leave Me Alone”
“Oh Comely”