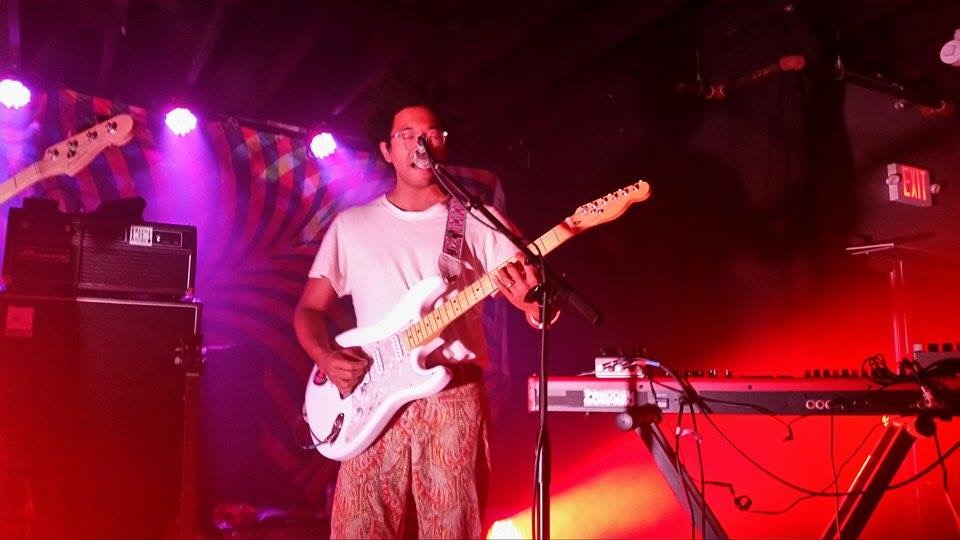 Columbia South Carolina electro-funk chameleon Toro Y Moi at last made his Buffalo debut Tuesday night at a sweltering Waiting Room with Astronauts, etc. and the clear consensus is that show was absolutely worth the wait. In town in support of  What For, his fourth studio album in five years, the prolific Toro Y Moi (aka Chaz Bundick) delivered an expansive set of chilled out electronica and corporate funk as heady, psychedelic ear candy that got the crowd moving

Opening act Astronauts, etc. established an incredibly chilled out vibe with an intensely smooth and soulful light disco rock built on a tight yet laid back rhythm section, dreamy keyboards and the seemingly effortless falsetto of lead vocalist and member of Toro Y Moi’s touring band,  Anthony Ferraro. The vibe was straight up late 70’s and it was strong, moving the growing crowd with sharp grooves and mesmerizing them with melodic and trippy synths that lazily wrapped around the aforementioned shimmering vocals that were consistently beautiful and transporting throughout the terrific 40 minute set.

Before too long, the smoke machines started up and joined with the intense humidity to lay down a righteous atmosphere for Toro Y Moi to make his first local appearance, rocking “Half Dome”  and “Buffalo” off their current release What For.  People there for chillwave classics had to wait out a few corporate rock few jams representative of Chaz’s new sound, an exploration of the sounds of a genre previously disregarded by the intelligentsia for it’s capitalist origins and connotations. In the hands of a seemingly tireless indie rock stalwart however with a penchant for stoned out genre bending, it was not unsatisfying.

Still, we had to get some Causers Of This, and Chaz gave us something with a lush and heavily chilled “Tamalak” before unloading some sensual grooves with Anything In Return’s “Grown Up Calls” and 2013 7″ single “Campo.” The corporate rock returned when Chaz strapped on his guitar for  “The Flight” and “Lilly” off of What For?,  ear tingling confections of yearning vocals and fuzzed out guitars. “Rose Quartz” was one of the night’s true highlights, with Chaz going all Bernie Worrell on the keyboards to get truly, deeply trippy in a way not too dissimilar to the heady sonics of Flaming Lips musical mastermind Steven Drozd.

The trippiness continued with the trip-hop infused, subterranean beats of “So Many Details,” “High Living,” and “Cola,” ideal music for sweating, fervent head bobbing and breaking it down. What For’s “Ratcliff” and “Run Baby Run” kept things low key with swirling 70’s keyboards, gentle acoustic guitars, and especially airy Chaz Bundick vocals before “What You Want” kicked off with the sounds of race cars and a hard charging groove that set up the big time funk featuring an infectious “Say That” and super fonky “New Beat” before “Empty Nesters” closed out the main set with a bittersweet yet joyfully rousing finale.

There was no way that was it, and after a brief interlude Chaz and the band returned to dazzle the exhausted and sweaty crowd with a pretty and satisfyingly spot on cover of Unknown Mortal Orchestra’s “Multi-Love.” Chaz handled Ruban Nielson’s falsetto while laying down ear candy synth lines to go with the band’s sweet dance breaks that reduced the crowd to a heaving mass moving to the MJ quality beats. “Yeah Right” let us down gently with chiming guitars, sweet harmonies, and intensely soothing rhythms before the lights came up and the show was over.

It’s a testament to the quality of the show that Chaz could get away with only one song off his breakthrough album and not catch any guff from the audience, some of whom had no doubt waited five years to see him in Buffalo. There weren’t any hard feelings as evident by the exuberant response of the appreciative and pleasingly diverse crowd that was down for the show from from the get-go when Toro Y Moi came onstage to Massive Attack. It was abundantly clear, however, that at this point in his career, Chaz Bundick is, in addition to being an important voice for Millennial anxieties, becoming a genre unto himself, worth checking out with each iteration. Hopefully he’ll be back in Buffalo in due time with what he’s up to next.