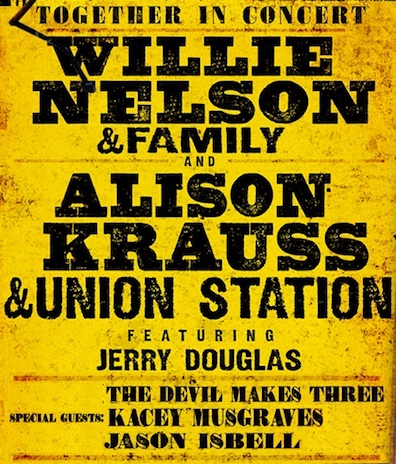 Hop on that country wagon when Willy Nelson & Family hit the stage tonight with Alison Krauss & Union Station featuring Jerry Douglas at Lewiston’s Artpark. A man who needs no introduction, Willie has made a name for himself through the endless stream of albums he’s masterminded, the 30-something movies he’s acted in, the several books he’s written, and the activism he’s fueled by his own creative genius.

As for Alison Krauss, underneath her 27 Grammy Awards and 49 nominations—she won her first in 1991, when she was only 20—is a virtuoso credited with helping to renew popular interest in bluegrass in the United States. Between the sweet finesse of her fiddle, the graceful range of her voice, and the raw talent that comprises her backing band Union Station, there are few that stand ahead in bridging the roots/country gap.