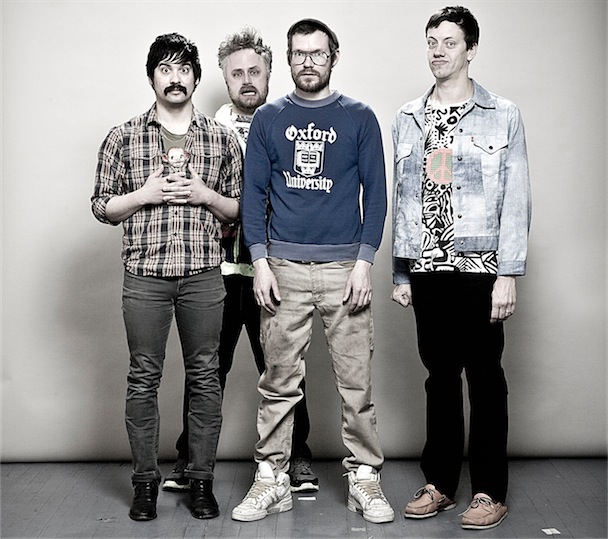 If you haven’t heard, Man Man is coming to Buffalo tonight. Since forming in 2003, it’s been easy to classify the Philadelphia-based group as an indie-rock band but they have many influences, touching on all genres of music. To add to the variety, they use an interesting blend of keyboards, synthesizers, percussion, and horns as well as typical drums, guitar, and bass.

The band first caught my attention while listening to an internet streaming radio playlist for Gogol Bordello. Man Man’s earlier works definitely has that Eastern European feel to them, like Gogol, but have evolved with their last couple of albums, achieving a sound that is uniquely their own. Their latest album, On Oni Pond, came out in September of 2013 and has been received favorably.

Honus Honus, the band’s frontman and lyricist, has a recognizeable, deep, raspy voice along with lyrics that produce cartoon-like imagery. The music they produce is fun and strange, and you can expect a very energetic performance from the band which always makes for a good time at a show.

Some tunes to check out of Man Man’s if you haven’t heard them are “Spookie Jookie” from their album Life Fantastic, and “Loot My Body” and “End Boss” – a tribute to Wolf Blitzer eating babies – both from their latest On Oni Pond. Oh, and if you want to annoy your wife like I tend to seem to do, play “Piranhas Club.” Check out  the video below and you’ll see what I mean.

Make sure you head down to the show early because opening for Man Man is Buffalo’s own Sleepy HaHas. Rest assured there is nothing “sleepy” about them. Unless banging your head and dancing is “sleepy music” The HaHas have been recognized in Buffalo Spree magazine as Buffalo’s best original local music act and there isn’t much room for argument there. This band has great energy and fantastic garage-blues licks behind their album Dull Days which you can find on bandcamp. Totally worth it.

Show starts at 8pm at the Tralf Music Hall. Tickets are $17 at the door. Dance your ass off and I’ll see you there man! Man!