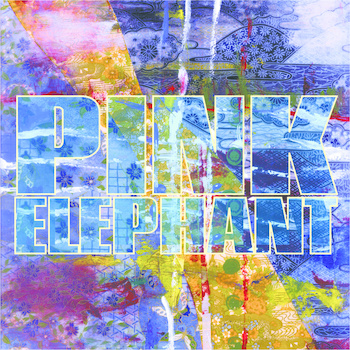 The debut LP from Rochester’s Pink Elephant is a head-rush of grunge, punk, and psychedelia that fans of bands like Mudhoney and The Melvins will likely be quite fond of. For 10 songs, the band captures the energy of pre-mainstream grunge mixed with late-60s psych rock similar to the 13th Floor Elevator. The album makes a strong impression, and should do a fine job of introducing the band to a larger audience.

The best track might be “Stupid Fuck,” which features the kind of self-lacerating rage that wouldn’t exactly be out of place on a Dinosaur, Jr. album, or maybe one of Soundgarden’s pre-fame efforts. Lyrics about putting a picture of your self on the wall “to remind myself that I’m a stupid fuck” is the kind of vitriol that Chris Cornell might have shrieked about back in 1989, long before the embarrassing Timbaland collaboration and Michael Jackson covers starting setting in.

Equally enthralling is “Employment,” the closest thing to an explicitly political track on this album. The track expresses frustration with wage inequality. “My work is essential!” goes the chorus. “But you’re the man!” is the sharp reply, as all of this takes place against a groove that should remind some of early Queens Of The Stone Age. The song describes class war in America in fairly succinct way it’s us vs. them whether we like it or not. It’s what Springsteen might come up with if he decided to do away with parables about working class life and just scream “fuck those bastards” at the top of his lungs. Honestly, if the programming on MSNBC is too dry for you, just listen to this song instead. It describes the problem in a much simpler way, and with a better guitar riff.

Indeed, this record thrives on its vitality. The lyrics are provocative and often angry, while the riffs are raw and heavy, sounding like a hungry band thriving on its own discontent. With any luck, this band should be able to find an audience with this record and potentially get some major label attention. But if that were to happen, they may never sound as gloriously unhinged as they do here. If you’ve been listening to too many slickly produced mainstream rock records lately, Pink Elephant should act as a perfect antidote.