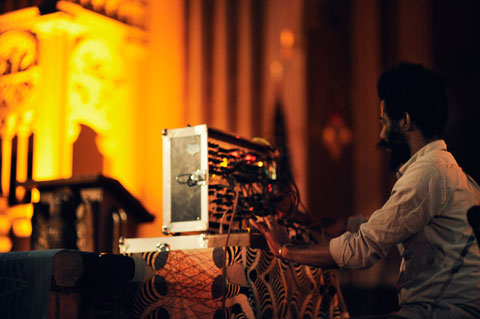 Artist Robert Aiki Aubrey Lowe has a body of work that ranges from acting, film composition, playing in experimental psychedelic rock band Om, as well as a solo modular synth project under the name Lichens. These vocal/electronic explorations bring to mind musicians like Julianna Barwick and Holly Herndon, with intricately layered and droning sounds. Back in 2005, Lowe released his first full length, The Psychic Nature of Being on Kranky Records, and has since put out six LPs under the Linchens project.

Tonight, the Brooklyn based musician will perform at Buffalo’s Silo City to help celebrate the life and works of Hollis Frampton, the pioneering avant-garde multimedia artist who finished his career teaching at University at Buffalo. Also performing tonight will be local experimental pop/electronic artist Lesionread, putting on a collaborative noise set with Space Cubs. Music starts at 8pm and the event is free to the public