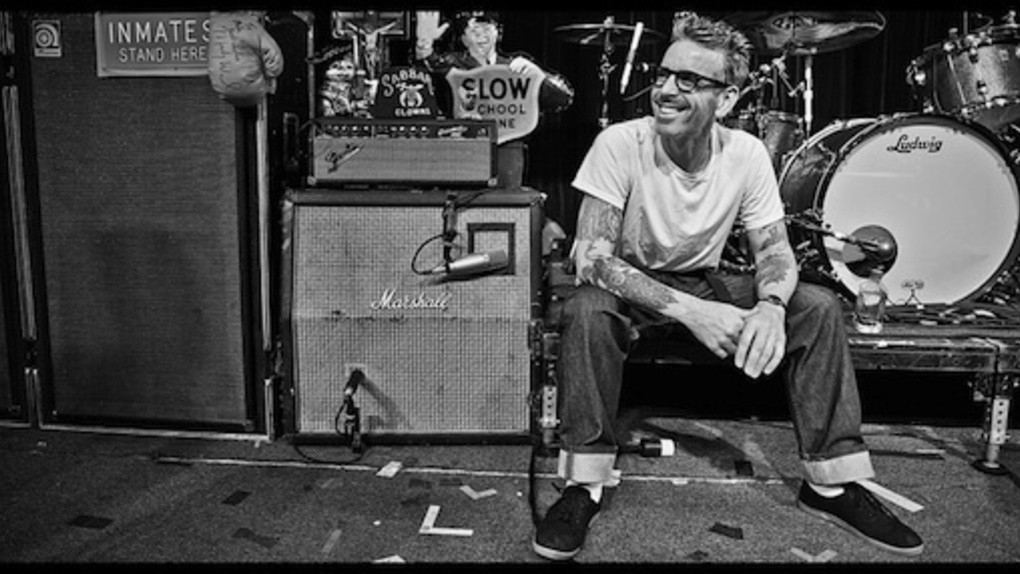 On a rainy Tuesday night I’m talking music with Jonny Two Bags, guitarist for the legendary punk band Social Distortion. He is about to embark on tour in support of his debut album, Salvation Town. Jonny speaks humbly about the recording process, discussing the uncertainty of recording as a solo artist.

“I wasn’t even sure what it meant to take my songs, and for the first time in my life, record them myself without the input or compromise that comes from working with other people, or in a band” he tells me.

I pick up something in his voice as we speak. It’s the sound of confidence that wasn’t always there. Jonny’s journey to become a solo artist wasn’t easy. Whether it was not being able to find the right players or getting the traction to make it happen, self-doubt played a part in the background. As Jonny tells it, part of the reason the album even happened was because of Pete Thomas, Elvis Costello’s famous drummer, who convinced him to make the solo “thing” a reality, and subsequently played on the album himself. Ironically, the arrangements have a very Attractions-sound and production, played through a country, folk and Americana-tinged filter. The end result is a fully realized, operative album in every sense of the word; a cohesive set of songs, expertly produced and recorded. And the songs are damn good too.

Salvation Town is as much homage to the roots of rock’n’roll as it is to the punk rock Jonny may be known for. Despite playing in famous punk bands, such as Youth Brigade, the U.S. Bombs, Social D., and the Cadillac Tramps, Jonny actually got his start much earlier, playing with his dad in bars when he was a kid. During this time, they would play a variety of roots-oriented rock songs as well as other types of music. You can hear the full breadth of Jonny’s influences on his debut, from the lively “One Foot in the Gutter,” to the accordion-aided shuffle of “Avenues” to the somber “Ghosts.”

The sound of Salvation Town extends way beyond a pure “rock album.” As Jonny puts it, “It’s not what you would call a guitar record. There’s some guitar stuff but also a lot of piano and organ.” The benefit, of course, is the fantastic players that accompany Jonny on this journey. Along with Pete Thomas, David Lindley, Jackson Browne and Los Lobos’ David Hidalgo round out the sound and contribute to fullness of the album.

Jonny tells me he is looking forward to this tour. I can hear the enthusiasm in his voice as he describes what it will be like playing with Jesse (Dayton), an old friend and former member of Mike Ness’ solo project, and Scott Biram, a solo artist who has been making waves in his own right. The Blood and Trash Tour makes its way through town tonight at Mohawk Place ($16, 8pm), also featuring Buffalo’s own Chris Malachowski of Wolf Tickets. Unfortunately this is an off-date for Biram, so he will not be playing the show tonight.

As we discuss the tour, and other odds and ends (What is what like to be on the road with Duane Peters, his favorite Ramone, and losing Denis Dannell, former guitarist for Social Distortion), I am struck by the sincerity in Jonny’s voice. He seems appreciative of the ride, and the ability to play great songs with great people.

“I’m blessed man,” Jonny say’s, talking about his musical journey. Listening to Salvation Town you get that sense too; the sense of a man whose been there and seen it, and has lived to tell the tale.