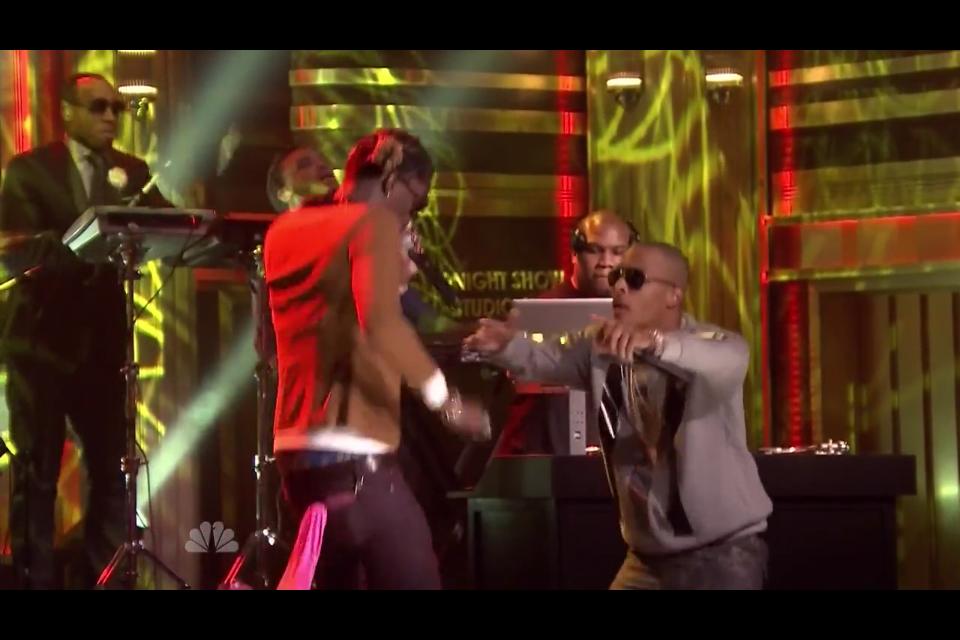 Last night on The Tonight Show with Jimmy Fallon, we saw perhaps the most meaningful performance in recent rap history, as it was the coming out party for a certain Thug. Young Thug has been making waves with some of the best party songs of the last two years, as well as being the new go-to hook man in the scene. So what makes this artist’s appearance particularly interesting? Well, we might end up looking at him as a trailblazer.

Kanye was weird when he was wearing pink polos and backpacks in the early to mid 2000s. He was stylistically a standout, the first mainstream rapper in forever with the preppy, intentionally not-gangster image. It would mark a shift in what was popular in rap, a move towards non-violence, humor, fashion, and so much more. He first appeared on the Dave Chapelle Show alongside Common, and has never left publicity since then.

Kid Cudi debuted his crooning, emotional, stoner-RnB hybrid at the 2008 VMAs. He went on to release two of the most acclaimed hip hop albums of the last 10 years. Though recent musical changes have put Cudi’s fans at odds, there was an undeniable reign from 09-11 in which Cudi was the hottest new thing in rap. His themes of depression and insecurity encouraged rappers to let their guard down, in turn  increasing their intimacy.

When he raps he squeaks and mumbles, and a lot of the time his lyrics can’t be decipheredd. Yet he is easily the most rising star in the current elite city of rap, the ATL. Migos, Rich Homie Quan, Trinidad James, Waka Flocka, K Camp, and the king of Atlanta, T.I., can release the rap song of the year at any time.

However, they don’t have the creativity and imagination of a certain Thugga. At 22-years-old, Young Thug has already dominated the club with songs that we didn’t know we’d like. Look at the lyrics to “Stoner” and tell me that looks like a hit. Yes, a lot of the popularity of that song comes from it’s beat, but the randomness of Young Thug’s words (interrupting the first verse to tell us he looks like Fabo 4 times), combined with an unmatched charisma (“andalé andalé andalé andalé andalé andalé”), and the ability to flow over a truly weird beat, turned the song into an inescapable mega-hit. “Danny Glover” got a turnt Kanye and Drake to wild out. Danny Brown called Thug’s 2013 release 1017 Thug the best of the year. The big names see the significance Thug brings to rap.

The release of the Thug assisted T.I. single “About the Money” was the exact formula Young Thug needed to complete his rap takeover. T.I. is a name that casual music fans can recognize, and Thug really does kill his parts in the song. He serves as the perfect contrast to TIP. T.I. is traditional, and Thug is experimental, to be plain and simple. The song blew up, and the promotions that follow are sure to bring awareness to rap’s latest game changer.

Jimmy Fallon is his introduction to a new audience. His uniqueness is soon to be emulated, but for right now there is no replacement for Young Thug, and more and more people are beginning to know that. I can’t help to think that as Young Thug bounced around excitedly off-beat during the performance, he knew that things weren’t going to be the same for him, and for rap, much longer.