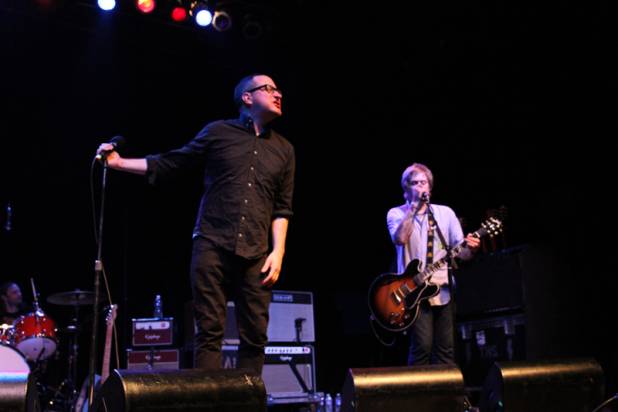 As advertised yesterday, The Hold Steady played the Town Ballroom last night. Cheap Girls opened (though I arrived too late to catch them) and dozens likely woke up with hangovers on this Wednesday morning. Though the band’s set wasn’t as strong as their harbor show last summer, they did pull off on an extended encore that felt even more invigorating than the main bulk of the concert. And they were, as always, The Hold Steady.

Much of the fun and sense of community that surrounds a Hold Steady show comes from the way frontman Craig Finn physically embodies his music. Every song is presented as a tale Finn himself is absorbed by the details of. At times, he is seemingly incredulous at his own narratives. Finger quotes accompany certain lines. Lyrics are repeated away from the mic as if they were side notes. Yet Finn is never detached from the irony. Instead, he feels fully invested in the joy of storytelling, his gestures and “dance moves” spastic and radiating with a drunken lack of self-consciousness. The fact that Finn is completely sober for the Lenten season hardly takes away from the sense that the he is some sort of strange, endearing regular at a local bar, sputtering out stories that rarely cohere.

Ultimately, the absence of multi-instrumentalist Franz Nicolay does bring a small void to the Hold Steady concert experience. Minimally, the band should hold auditions for a travelling keyboardist as songs like “Stuck Between Stations” and “Stay Positive” feel somewhat strained without piano and organ respectively. In the end though, The Hold Steady still throw the killer parties they sing about. Finn began the concert by promising his audience a good time, and I’d be hard-pressed to say he wasn’t a man of his word.

“I Hope This Whole Thing Didn’t Frighten You”
“You Can Make Him Like You You”
“Got to Dance with Who You Came to the Dance With”
“The Swish”
“Rock Problems”
“Magazines”
“Big Cig”
“Sequestered in Memphis”
“The Ambassador”
“Spinners”
“The Weekenders”
“Almost Everything”
“Banging Camp”
“Ask Her For Adderall”
“Your Little Hoodrat Friend”
“Southtown Girls”
“Chips Ahoy!”