The Flaming Lips – With a Little Help from My Fwends 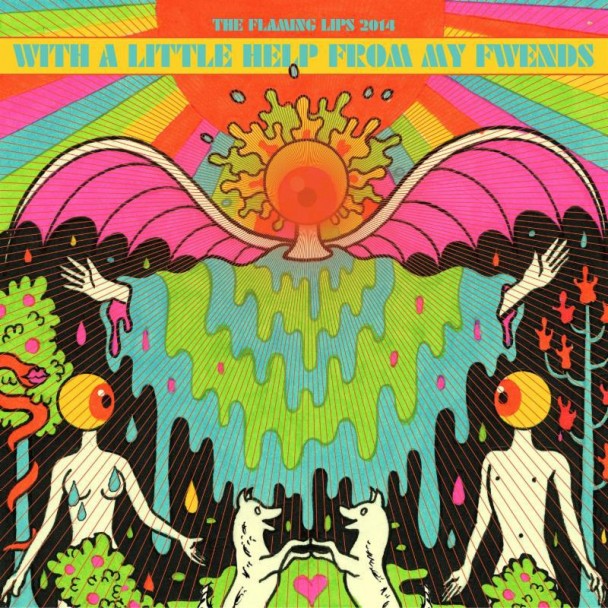 Trashing an album like this is not easy, mainly because of how insanely easy it is. That Wayne Coyne, amidst accusations of cultural appropriation, unchecked egomania, and sad self-parody, would record an acid-damaged track-for-track cover of fucking Sgt. Pepper’s with Miley Cyrus reveals either a profound lack of self-awareness or an eager attempt to destroy his band’s legacy. It sounds like a joke your skeptical friend might have made about the band when you tried to get him to just hear The Soft Bulletin. As a long-time Lips defender and fan, I found the move exciting in its sheer audacity, and went into my first listen of the album with much hope. I’ve always been secretly kind of psyched about the Wayne-Miley friendship, and figured that the ballsiness of the project would warrant its existence. And it’s never fun to hate on something this ridiculous.

But when I first listened to With A Little Help From My Fwends, I felt betrayed. On first listen, the thing is nearly unlistenable. If the original is a touchstone of acid-influenced psychedelic music, Fwends is psych rock from the depths of a k-hole – fumbled rhythms, extreme and ugly in-the-red aesthetics, rambling drones, and sonics that place every instrument and voice behind a thick wall of fuzz and stoned reverb. The opening track – the title track of the original album – is an utter butchering of the song, replete with nonsensical key changes, muttered vocals, and an incongruous and completely random fuzz solo by Dinosaur Jr.’s J. Mascis. The sheer amount of inexplicable decisions made in these covers is incalculable. How to explain the hardcore punk drums and screeched vocals on “With A Little Help from My Friends?” Or the decision to have the Cool Kids’ Chuck Inglish mutter his way through “Getting Better,” the members of Dr. Dog backing him up like a deranged barbershop quartet? The sheer strangeness of this album means that by the time Foxygen and MGMT’s Ben Goldwasser turn the “Sgt. Pepper” reprise, 1 minute on the original album, into a 5 minute freak-funk jam, it seems like a conservative cover. I felt provoked by this unwieldy record, and even texted a friend in a fit of rage that I was finally pushed over the edge by Wayne Coyne’s attention-starved tactics.

But in subsequent listens, I found my rage turn into fascination and even guilty-pleasure love for this record. It’s excessive and repulsively self-indulgent, and not everything works (“Being For the Benefit of Mr. Kite!,” which Maynard James Keenan of Tool turns into something out of Invader Zim, is particularly rough), but a nice pair of headphones and a generous attitude go a long way toward enjoying this record. Turning pop music’s most universally well-regarded album into a debauched freak-out really does breathe some life into a work that many regard as scripture, the aural equivalent of taking a box of crayons to Picasso’s Guernica. It doesn’t make it better, but it’s a fun piss-take done with equal parts reverence and well-spirited mockery. Once it’s understood as an act of fuckery by a band with nothing to lose, one can note the blasphemous aural jokes buried within the layers of synthesizers and distortion. The famous, climactic C-chord of “A Day in the Life” that completes the album is ousted completely. The sitars that proved so crucial to the original “Within You Without You” are replaced with shrieking feedback. The opening lyric of “Friends” – “What would you do if I sang out of tune?” – is Auto-tuned, for God’s sake. This is the kind of cover that actively challenges and comments on the material, which is so much more interesting and inflammatory than a conservative, by-the-numbers tribute.

In a music landscape that has canonized the beloved Beatles beyond reproach, the Lips’ aggressive distorted weirdness feels like a thrillingly subversive bit of throwaway fun. It’s not going to replace Yoshimi Battles the Pink Robots in your collection (or the original Sgt. Pepper’s, for that matter), but as a lark whose sales go to charity it’s a worthwhile excursion from these weirdos. Now let’s just hope Wayne and co. pull it together and record another record on par with Embryonic before we get next year’s inevitable Pet Sounds desecration.

Grade: #?%^ (there is no letter-grade equivalent)