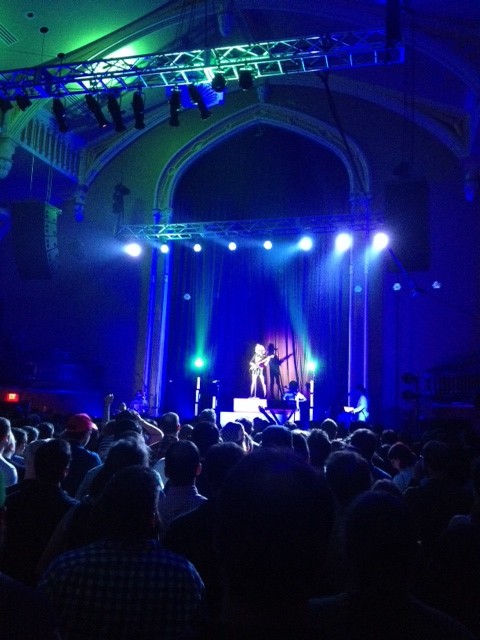 Saturday night, the packed house at Babeville was privileged to experience a magical night of music and art when indie wunderkind St. Vincent returned to Buffalo with Brooklyn ambient guitarist Noveller. Folks from far and wide (a few blokes were up from Dallas specifically for the show) and local devotees converged on the re-purposed old church on Delaware and Tupper for worship of a different kind and were given ample reason to from start to finish.

Brooklyn based guitarist Sarah Lipstate, aka Noveller, took us to church early with an enchanting set of ambient guitar rock, building a sea of sound with her lone guitar with loops, effects, drone, and reverb that took full advantage the acoustically vibrant space. The emotion drenched and deeply melodic compositions swirled and mesmerized while building to an impressive climax reminiscent of Sigur Ros at their most dramatic, with Lipstate deploying a bow to get a little Jimmy Page/Jonsi on her guitar. The spell that had been cast was such that after the copious applause and final guitar strains had faded it still hung satisfyingly on the bewitched crowd and carried over to the headlining set, only to be broken and replaced by a different one created by the art rock happening of St. Vincent.

Soon the house lights dimmed, a Stephen Hawking like voice intoned something about digital experiences, and all of a sudden Annie Clark was there, a life force emanating from the stage and launching into “Rattlesnake” and “Digital Witness” from her eponymous fourth album. A shock of artfully angled white hair and future couture moving with automaton like precision and purpose, her intense and refined presence indicated that this was going to be a performance on multiple levels, a promise fulfilled for the entire duration of the main set.

It’s a real shame hipsters don’t get down because St. Vincent got the show started with some choice, angular beats for Annie to shred over, and shred she did on crowd-pleasers “Cruel” and the deliriously off kilter “Birth In Reverse,” which featured a brilliant bit of lighting and choreography  that pleasingly played psychedelic havoc on the eyes as Annie and her quartet moved around the stage like Japanese wind-up toys. Other times they moved about like there were remote controlled drones performing like in a William Gibson novel, or like the dancing bears you’d see at a Chuck E Cheese, remarkably lifelike indie rock animatronics cranking out energized and art rock that got progressively freakier as the main set progressed, with William Burroughs-esque stage banter and Annie never breaking performance art “character” once.

The show moved into more trip hop and avant-garde waters, with Annie and her whip tight band dazzling on a dreamy yet concise “Prince Johnny” and acutely smoldering “Year Of The Tiger,” and crafting sounds every bit as evocative and expansive in that vast old church as opener Noveller. Is it trite to say that it was all very quasi-religious? The funky, sweet harmonies, our abject worship that kept the quiet parts for the most part perfectly quiet, the de-consecrated and perfect setting… yes it got a little quasi-religious, and that’s frankly before the rapture at the end, after a sweet “Strange Mercy” and avant-garde face melter “Your Lips Are Red” filled the crowd with ecstatic abandon.

Enjoying the sweet post show after glow, I was tremendously impressed by St. Vincent’s profound artistic progression since I’d seen her in Buffalo in May 2012 and with David Byrne later that fall. Here was a fully realized piece of art, gracefully yet intensely sustained for the entire duration of the main set and only really broken at the very end by the artist when the rapturous Buffalo crowd and Annie expressed our love for one another after an incredible show that I’m still processing. Annie Clark’s St. Vincent is so much, all at once, and her transcendent show Saturday night confirmed that this is only the beginning.