Songs of the Summer: Staff Picks 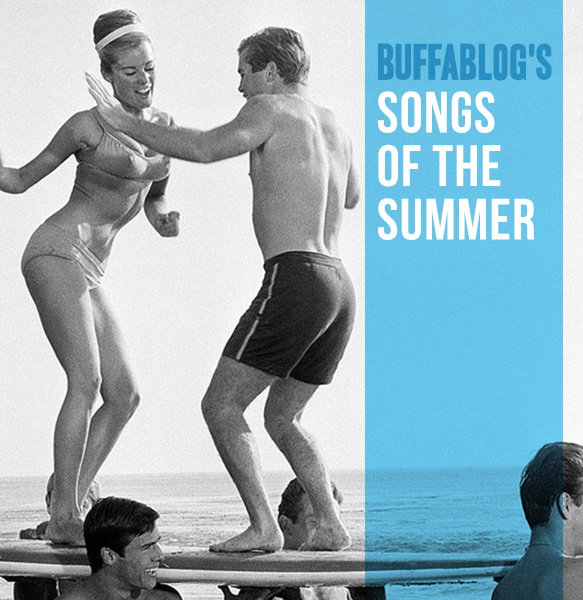 As I type this intro, students have returned to campus, coming in and out of my office at UB North, and with Labor Day weekend upon us, normally the last gasp of summer here in Buffalo, the seasons are about to change for all things pumpkin spice, despite what this recent humidity says. But before we turn the page on another great summer in Buffalo, the blog staff compiled a list of the songs that helped shape the season not only our office, but the city as well. Check out our staff picks below.

Ronald Walczyk
Mac DeMarco – “The Way You’d Love Her”
Not many artists can conjure carefree summer vibes quite like Mac DeMarco can. His latest effort, Another One, is mostly a handful of swaying lully-love songs, with a few standout tracks. One of those standout tracks, album opener and premiere single “The Way You’d Love Her,” took my summer to the next level. It’s the quintessential ‘pep in your step’ kind of track—goofy, jangly, all-around feel-good. Take a sunny stroll down Elmwood with this gem gracing your headphones and just try to keep your smiles down. Disclaimer: you can’t.

Matt Moretti
Jamie xx ft. Young Thug, Popcaan – “I Know There’s Gonna Be (Good Times)”
The xx-ian and genre-bending producer Jamie xx fuses together modern hip hop, Jamaican dancehall, and a barbershop quartet on a summer anthem that somehow manages to sound so right. Beautiful mastering combats Young Thugger’s dialect, ensuring that this is likely the clearest you’ll ever hear the new Atlanta titan deliver lines like “Imma ride in that pussy like a stroller.” Jamie mindfully floats between the Popcaan/sample chorus with switch-ups in his chime-y beat, creating a song that just keeps getting better. The production has the perfect amount of knock, with a chorus catchy enough to make for a great anthem for the summer.

Matt Cox
Diet Cig – “Dinner Date”
This past spring, I attended at a show at Legion Bar in Brooklyn with a bill that included New Paltz two-piece outfit, Diet Cig, a band which I had zero familiarity with at the time. Turns out, Diet Cig had already been mentioned in Rolling Stone’s “25 Best Songs of 2015 So Far” and brought more energy to a room that I have felt in quite some time. The room exploded.

Ultimately, their set gave me hope in many ways for a variety things and if I had to be totally honest, it was the most fun I’ve had at a show in a while — the type of show where you’re more worried about it never ending than actually enjoying the moment. Vocalist/guitarist Alex Luciano was incredibly friendly and really knew how to roll her eyes and strum the thing. However, I did feel bad when she fell off the bass drum and smacked the crown of her head — but hey, that’s just how Diet Cig rolls themselves.

Mac McGuire
Wilco – “Random Name Generator”
While Wilco may never again be able to shake that “dad rock” label that has been floating around the band for the better part of a decade, Jeff Tweedy and company proved this summer that dads can still surprise with the sudden and free release of Star Wars, the group’s most intriguing album since A Ghost is Born. Sounding as fuzzy as ever, the album’s third track “Random Name Generator” is a tight cut of call and response between Tweedy and some laser like guitar lines that was an exhilarating kick in ass during summer’s dog days from a band that could have easily coasted for the rest of its career.

Chris Winter
Kendrick Lamar – “Fore Free (Interlude)”
While not a typical summer song, given the events that have gone on throughout our country this season, my song of the summer comes from Kendrick Lamar’s To Pimp a Butterfly and is “For Free (Interlude).” I particularly like the powerful message this song carries. It’s an incredible poem proclaiming that the narrator is not “free” as many perceive men to be sexually, eluding to the idea that woman cost something but men come free  Looking deeper, though, this is a Fuck The Man song with Lamar ultimately stating that he will not be a slave to the system and that his value cannot simply be measured.

Brendan O’Connor
The Weeknd – “Can’t Feel My Face”
I never thought I would say this, but I actually like a song by The Weeknd. On “Can’t Feel My Face,” alt R&B vocalist Abel Tesfaye switches up his classic NSFW style for an incredibly Michael Jackson-esque approach to pop music. Normally when I get into a lot of pop music, I listen to it repeatedly until I run it into the ground and end up hating it, but this track has stayed with me all summer. And for a song that is played on the radio almost nonstop, it’s 100% about doing cocaine, so go figure. The hook on “Can’t Feel My Face” is the best I have heard all year, and I’m sure it will stand the test of time.

Meghan Milsted
Fetty Wap – “Trap Queen”
Fetty Wap’s “Trap Queen” has been my jam this summer.  I can’t hit a club or request a song at a dive without thinking about that banger. “Trap Queen” is even on repeat as my work playlist.

Michael Moretti
Mac DeMarco – “A Heart Like Hers”
Mac Demarco is a name that I’ve always seen and recognized, but I never really go into it, assuming it was mostly over-hype and the cool thing to listen to at the moment. Fast forward to a sunny day in early summer where I had a hankering to listen to Ariel Pink on my Xbox. After “Put Your Number in My Phone,” ended, the pepperoni playboy came on and I was instantly hooked. He is 100% legit and I spent the remainder of the afternoon/evening/night sucking in all of Demarco’s “jizz-jazzy” repetoire, watching interviews, music videos, live performances, and backstage goofin’. My song of this summer is “A Heart Like Hers” because it was one of the most memorable songs and most played. I’m living in a Mac Demarco world now.

Cliff Parks Jr.
Beck – “Dreams”
As somebody who listens to a fair amount of terrestrial radio, ubiquitous songs on the radio usually either: 1) suck (ie Walk Off The Moon) or 2) eventually suck (ie anything from Of Monsters And Men), and for summer jams this is doubly true. Beck’s “Dreams,” however, wonderfully defies this reality thanks to a killer riff, irresistible hooks, a spaced out sing along chorus, sharp, super danceable beats, and no cheese. It’s also the only song in heavy rotation on Toronto’s 102.1, the ordinarily ho-hum Alt Buffalo, and impressively, Buff State’s 91.3 WBNY.

Nick Muldoon
Carly Rae Jepsen – “Run Away With Me”
While other songs came to mind when asked this question, from artists as diverse as Jamie xx, The Weeknd, and HEALTH, I thought I’d shine a light on artist who probably doesn’t get as big a mention around here: Carly Rae Jepsen. After releasing one of the best songs of 2012 in “Call Me Maybe,” Jepsen seemed to disappear from the spotlight for three years. Rather than cultivating the kind of massive cultural persona of a Beyonce or Taylor Swift, Jepsen stepped away to do something much simpler: make the best damn pop music she could come up with.

Enlisting hundreds of collaborators over the years, it seems as if her time with indie heroes Rostam Batmanglij (Vampire Weekend) and Dev Hynes (Blood Orange) left the most lasting impression. From the opening of it’s M83 inspired rising synths and sax, “Run Away with Me” is pure musical dynamo, a cathartic and anthemic ode to budding romance and the escape of a good night out. There’s been a lot of great singles this summer, but few I’ve spent more time blasting than “Run Away With Me.”

Jon Krol
Tame Impala – “The Less I Know the Better”
Let the world know. I am a sucker for a good pop hook. I’m also really, really into reverb-drenched, soul-influenced, psych-rock. So Tame Impala has been a band I’ve latched onto. In many ways, “The Less I Know the Better” is a throwback jam with a very retro feel, spiderweb bass-lines, and guitars weaving beautifully into and out of the mix, stompy-drum beat. It’s a perfect summer song for beach strolls, moon gazing, or car cruises.

Joe Cardina
King Gizzard And The Lizard Wizard – “The River”
What is a “song of the summer?” Why must we place such an arbitrary label on a track that was probably written in the winter months, produced in the spring, and then finally released this summer? I just don’t get it! Kanye probably wouldn’t be behind this sort of thing, especially after his MTV slandering appearance on MTV this past weekend. I’m with Kanye on this one. You shouldn’t adhere to these lists that belittle other artists as “losers.”

That being said, King Gizzard and The Lizard Wizard is a psych rock band out of Australia that make all other bands big fucking losers. They have seven members, they’ve released seven albums in the last fou years or so, and are slated to release another one in November despite releasing Quarters! earlier this year. And my song of the summer is off of that album. It’s called “The River.” It’s 10 minutes long. It paired immaculately with the week I spend somewhere in the boonies of New York State floating on a lake and drinking beer. So go listen to something by King Gizz before their discography gets too large to handle.