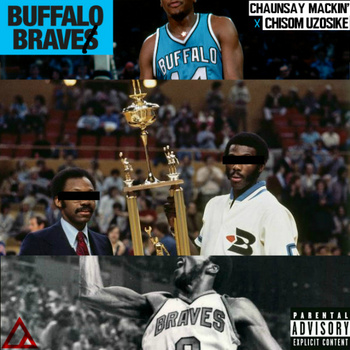 On the Buffalo Brave LP, ChaunSAY Mackin’ and Chisom Ozosike’s second take on a hip hop duo, the Buffalo rapper and Maryland producer (who previously released The Buffalo Bill EP together) are a fantastic combination of modern bar-rap and smooth soul sample beats. Opening track, “The Encore,” kicks off with a blast of horns that sound like they came right off a Village People record. The beat flips around for a while before it settles on a guitar strum and a funky bassline, working off of the same sample as this BET Hip Hop Awards Cypher. Throw little “Numbers on the Board-esque” celebratory “Yeah” vocal and a high pitched female note, and you got yourself a hell of a beat over which Mackin’ dances entertaining lines all over.

Second track “Reputation” plays off of the same sample as Kanye’s “Bound 2,”  a seemingly daunting task considering the recognition of the latter. Chisom expertly reworks the sample, creating a beat distinctly separate from West’s, and one that is fantastic. He’s crafted a consistently evolving guitar and vocals based beat, from which Mackin’ flows effortlessly over. He flexes his bars on here, the highlights of which include the laugh-out-loud -funny line “I say ‘Which you got that banana for, Potassium?’ She said ‘Nah, I’m practicing.'”

“’74 Braves,” a nod to the city’s former hoops team, kicks off with an intro of Brent Musberger beginning an interview with one of the best NBA players of the 1960s (and all-time), Oscar Robertson. Brent Musberger is the same announcer that made the creepy comments about AJ McCarron’s Miss Alabama girlfriend during 2013’s College Football National Championship game. He’s like infinity-years old. Moving on, the beat begins as a beautifully rising and falling string loop with rhythmic flutes, but becomes more menacing with the change of a channel. Mackin’ compares the duo to Kobe and Shaq, and LeBron and Wade, and proceeds to put down all the trash rappers. Chisom’s beats tend not to stay the same for long, as beat flips and additions find themselves on nearly every song.

The album’s sixth track, “SevenOneSix,” serves as Mackin’s ode to his hometown, on which his versatile flows are on display. Sometimes he’s fast, and other times his rhymes are chopped up to sync with the beat, on which he sums up his experiences thus far in the Buff. One of two songs to feature guest artists, “Everything Black,” gets an assist from Tia P and Obie Idoya. Tia P, a female emcee, takes influence from Lauryn Hill as she beautifully raps an sings about her experiences as a women trying to break the door into hip hop music. Obie follows up Tia P’s verse, thoughtfully discussing being a black man in the middle of the country. Mackin’ tacks on a Buffalo-centric braggadocius verse to close out a really great hip hop track.

Closing track “The Benediction,” is just that. It’s a celebratory, smile inducing end to an album that, aside from some serious moments, is just filled with happy records. Mixing in some Kanye references, Mackin’ goes in about the Nickel City and his own greatness. Chisom’s sample choices are as on point as ever, concluding a project that he really set the fabric for on each song. Mackin’ is a talented emcee with a voice that has a certain smoothness and listenability to it, automatically making any track sound good.

Listen to project below and name your price for it on the duo’s album.