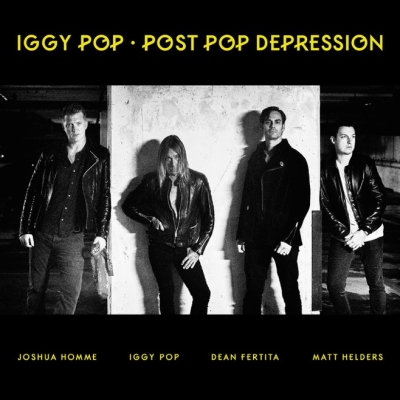 Releasing a rock and roll album at 68 years old is no easy task as the genre is almost synonymous with youthful energy. When you are one of rock’s most legendary icons does that mean you can still release music that was up to par with your early material? That’s a question in which will be debated endlessly, but I can safely say that Mr. Pop still has the weirdness that we know and love along with some fresh creative energy. Pop brings a flavor that isn’t youthful energy, but is no doubt rock n roll. On the icon’s latest effort, Post-Pop Depression, the vocals bring about a sound reminiscent with the likes of Johnny Cash’s sound when he was around the age Pop is now with the added crudeness that we are familiar with when it comes to Iggy Pop.

This is certainly not to say that Post-Pop Depression lacks energy, as this project was filled with a hand-picked all-star lineup. The album is credited primarily as a joint effort between Pop and Queens of the Stone Age front man, Josh Homme. As Homme is the lead guitarist and producer on the album, he had big shoes to fill as none other than David Bowie produced Pop’s previous solo effort. The vast majority of Homme’s catalog is good, and with Iggy Pop being in tow for this project should make any fan optimistic. Rock and roll certainly does not hold the place it used to in mainstream culture, but Homme is one of the few musicians to have the respect of many knowledgeable listeners and your average “Rock music fan.” Rounding out the band is bassist, Dean Fertita, from QOTSA/Dead Weather, and drummer, Matt Helder, of the Arctic Monkeys.

Iggy Pop is does not rely so much wild antics these days, but that’s not to say he’s lost his punk attitude. This is, after all, a man who should be synonymous with the punk ethos and being one of rock and roll’s most successful rebels. The first lyrics of the opening song, “Break into Your Heart,” are very fitting for an Iggy Pop album as sings “I’m gonna break into your heart, I’m gonna crawl under your skin” over synths. This song will leave you wondering what is to come with this album as it gives off a strange ambiance.

The next song,” Gardenia,” includes some really nice shoegaze-guitar played Josh Homme. Another note is the really smooth bass line in this song. By this point you can tell exactly how much Pop’s voice has aged, and he’s got older experience rock star thing down pat. The song is sung in a sarcastic tongue-in-cheek-humor sort of way as he sings about being “alone at a cheap-o motel by the highway to hell.”

The song “American Valhalla” encapsulates Pop’s inner-thoughts about inevitably fact that death is to come in the not-so-distant future. “American Valhalla”  is solid, and one of my personal favorites on the record with the some of his best introspective lines such as “Death is a hard pill to swallow. Is anybody there? Can I bring any friends?,” followed by “I have nothing, but my name”. The simply stated fact that even rich and famous rock stars can’t take anything past the grave.

Smackdab in the middle of  the album is “Sunday,” a song that goes into just getting through the week. Pop does get personal here as he sings “Got all I need and its killing you and me”. The song finishes with a beautifully composed piece with horns, violin, and a woman singing. The closing song on the album “Paraguay” is probably the best on the album. Iggy reflects on his wild life as a rock n roller and summarizes it as not having much reason behind it other than simply being like any other wild animal inhabiting this earth. He goes on a rant as the rest of the band egg him on and he angrily yells about the world we live where people hide behind technology hiding from reality. Pop is still pissed off as ever and he blames it on the fake society in which we live. A highlight of the rant may clue you into what’s going through his mind as he yells frustrated, “You take your motherfuckin’ laptop and just shove it into your goddamn foul mouth, down your shit-heeled gizzard, you fuckin’ phony, two-faced, three-timing piece of turd.” He’s still got it folks, Iggy Pop will go down in history as one of the all-time great rock and rollers with a badass punk attitude.

“Chocolate Drops,” the eighth song off the album, is an ode to his bumpy ride of success as he laments its fickle “When you get to the bottom, you’re near the top/ the shit turns into chocolate drops”. “Vulture” and “German Days” left me wanting more from Pop lyrically, as the lyrics seemed hastily written and a bit predictable. Although the instrumentation on both are satisfying as the guitar where “Vulture” delves into nice folky western style, and “German Days” has smooth bass, suitable piano, and Homme’s sharply written guitar riffs the tracks feel as though they were underutilized by Pop.

If this is Iggy Pop’s last hurrah so be it. Post Pop Depression is not perfect, but it is a solid album with what you want out of a Pop record with its strange lyrics, abrasive sharp guitar riffs, and a no bullshit take on life.