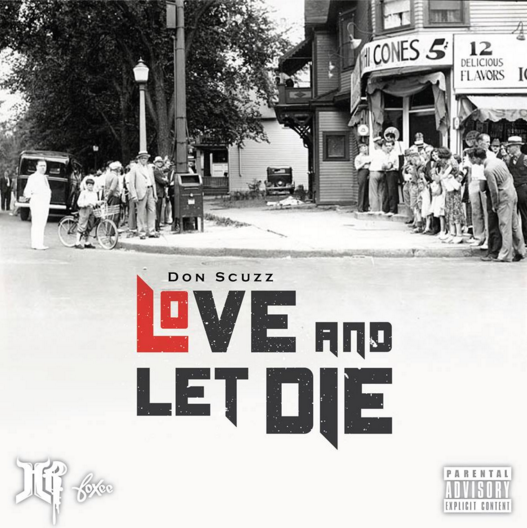 Buffalo rapper and Hooligang member Don Scuzz is a hard hitter. Best recognized by his gruff, intimidating flow and ability to rap the hell out of a chorus, Scuzz comes into the middle of February with another project under his belt. In Valentine’s Day spirit, Love and Let Die is a Scuzzian fusion of street sounds and lyrics with surprisingly great depth to them.

Project highlight “50 Facts” stands as one the best tracks we’ve heard from the Don. Built off of a Zaytoven-esque descending piano, Don and guest Meechy El Camino stick to a melodic flow reminiscent of throwback stuff from Dipset and even French Montana’s non-mainstream work. Meechy asserts himself on the first half of the track, dropping a verse with some really great flow switches and all around solid lyricism. Whether he’s on “Genesee faded off Hennessy” or “pulling off in the Jag with the MTV hat to the back,” Meechy has the confindent flow of someone just dropping off facts. Not to be outdone, Scuzz delivers a killer chorus on here (per usual) in addition to outrageously entertaining lines like “I just touch down on that ass and do a dance like a wide receiver.”

Though Scuzz makes his bed with his grim voice, he has a knack for coming through with wisdom and reflection at the most unexpected times. On “The Don,” he appears to be initially focused on shouting out his girl, but a minute in Scuzz flips the script and focuses on himself, his flaws and his path. “I ain’t proud of myself, so I don’t lie to myself. I’m in the studio for hours getting high by myself,” he raps as though he’s staring at a judgmental mirror.

Scuzz draws inspiration from former Bill and fan-favorite Fred Jackson on this project as well, turning the running back into the title of one of Scuzz’s knocking tracks. He creates another banger on “Motel 6,” a track essential punching Don’s haters and detractors in the face. He stays intimidating with threatening talk, but the cynical rapper in him comes through in lines like the excellent “I hit my first blunt around the time Michael Jackson died, you rap muhfuckas acting like the Jackson 5.” That’s a gaudy roast and I love it.

Don continues his shine throughout the back half of Love. Never fearful, Scuzz will flex his illicit activities and then a bar later drop something like “I told my brother he could be anything. A couple weeks later he’s on the tv fleeing the scene,” which comes off of “Deathwish.” The content of his lyrics tells tales, but it’s up to the listener to form that narrative and figure out who this dude is and the message he’s trying to get across.

It makes for an awesome, thorough listen. Scuzz retains elements of gangsta rap and splits off into trap and boom bap, all together making up a project with a variety of different beats and subject-matter all over the place. Give it a listen as it drops on V-Day, and for now peep Scuzz’s recent “BankRolls Remix.”