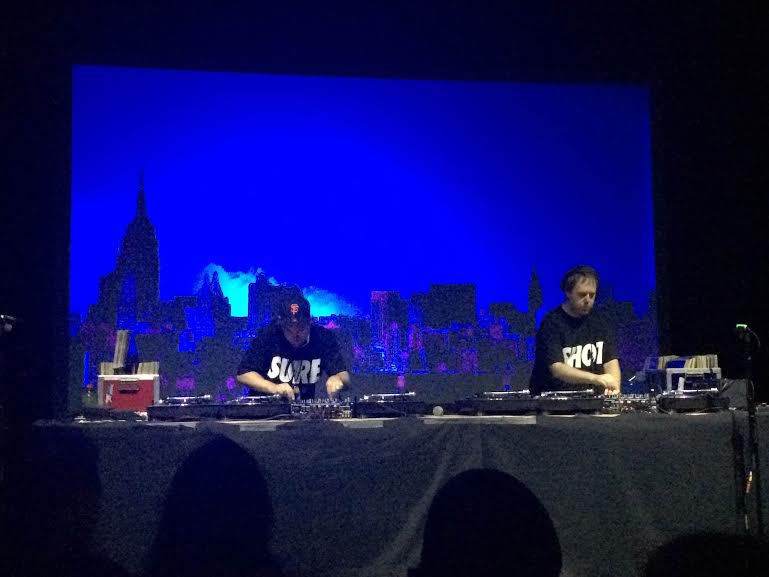 On Tuesday night, those in attendance at the Town Ballroom were taken on a journey through nearly 40 years of the rich musical history that laid the groundwork for hip hop culture. DJ Shadow and Cut Chemist surgically moved through their set comprised of six turntables, a vintage drum machine, and a collection of records taken from Cornell University’s library, originally belonging to Afrika Bambaataa. The two performers genuinely expressed their gratitude for the opportunity to play the original copies of tracks that help build the culture that they love and champion.

Despite the exclusive circumstances of this unique performance, both Shadow and Cut Chemist played with a casual, personal demeanor, occasionally explaining the historical significance of tracks or pointing out various breaks and samples that have been countlessly built upon over the years. Every musical moment was deliberate and contributed meaningfully to the eclectic soundscape that included everything from dub, rock, and r&b to disco and funk.

The pair also put their seasoned turntablist skills on display, frequently beat juggling and scratching, making each transition a chance for the crowd to re-engage with the groove and follow them onto the next phase of their comprehensive set. At one point, attention was even brought to the B-boys and B-girls who came ready to showcase their expressive breakdancing moves. After the set came to an end, DJ Shadow reminded the audience to look back and tell their children of their experience that night, having heard these storied records in their original context. Put into words, the importance of Afrika Bambaataa and the innovative culture he inspired cannot be fully articulated without hearing firsthand, the approach to DJing and music performance that defines his legacy.

In what was DJ Shadow and Cut Chemist’s first appearance together in Buffalo, the two artists selflessly presented a part history lesson/part celebration of musical culture that made for one of the more memorable, fun-loving shows to come through our city this year.