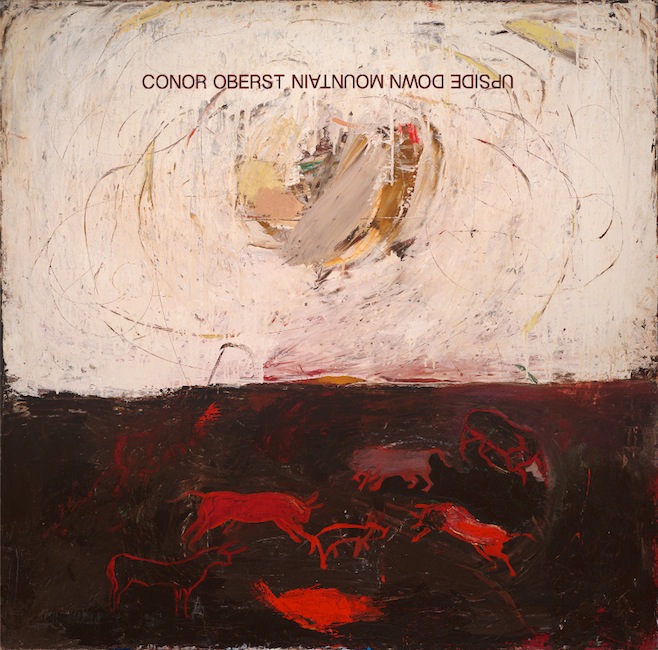 There’s a mountain in southern France called the Pic de Bugarach. It’s a bit of a geological anomaly because rock samples taken from its peak have actually proven to be older than samples taken from lower elevations, earning it the nickname “Upside Down Mountain.” Geologists have come up with a perfectly reasonable explanation for this, involving “thrust faults” and “horizontal compression,” which I can only vaguely pretend to understand. If you Google Pic de Bugarach, however, you’ll find that others have come up with far more scientifically dubious (but more interesting!) explanations involving aliens, spaceships, and the apocalypse.

It shouldn’t be terribly surprising then that Conor Oberst has titled his new album after the nickname for a mountain worshiped by esoteric New Agers. Ever since Bright Eyes released Cassadaga in 2007, Oberst has shown significant interest in spirituality. The lead tracks on the last two Bright Eyes Albums featured cryptic ramblings about clairvoyance and aliens, (see: “Clairaudients” and “Firewall,” respectively), he recorded his self-titled 2008 solo album in Tepoztlán, Mexico in a mountain villa called “Valle Místico,” and then recorded a follow-up album with his newly formed “Mystic Valley Band.”

Other than the title, however, Oberst’s latest solo album, Upside Down Mountain, is relatively devoid of spiritualistic references and might actually be considered something of a throwback to his earlier work, in sentiment, at least. 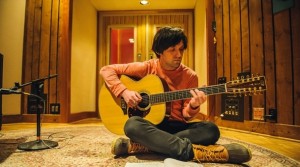 Oberst is only 34 but it seems like he’s been around forever, (the logical side effect, maybe, of beginning a music career at 13). Most of his output has been under his own name or the Bright Eyes moniker and it’s always been a bit difficult to tell where those two entities begin and end. (A confusion of nomenclature unassisted in 2011, when Oberst seemed to suggest he would be retiring the “Bright Eyes” name after their latest album, The People’s Key, a sentiment that he has, more recently, stated was not actually true.)

The easiest explanation might be that “Bright Eyes” evolved into a project that was inextricable from producer and multi-instrumentalist, Mike Mogis, while anything that Oberst did apart from Mogis would take on “solo album” status. Other than that, there doesn’t often appear to be much difference. Oberst still writes all of the songs and then employs a reoccurring cast of characters from an army of west coast and Omaha-based musicians to play them. Further, Oberst’s music has been largely folk-tinged, regardless of the credited project, ever since the great 2005 Bright Eyes schism of I’m Wide Awake, It’s Morning and Digital Ash in a Digital Urn, where two roads diverged in a wood and Oberst took the one with more pedal-steel.

That trend (bucked only by The People’s Key, which seemed to be a concerted effort to cast off folksiness) continues on Upside Down Mountain. Here, Oberst worked with producer, Jonathan Wilson, perhaps best known (to me, at least) for his production work on Father John Misty’s excellent Fear Fun, and the results often echo the classic, yet slightly unsettling, Laurel Canyon-folk sound of that album. Wilson plays, very capably, on most songs here, along with Bright Eyes mainstays, Andy LeMaster and Nate Walcott, in addition to Cully Symington of Okkervil River on drums, the Söderberg sisters from First Aid Kit (“oohing” on many choruses), and others.

As such, the album should sound fairly familiar to anyone caught up on Oberst’s output over the past several years, but the songs themselves are more reminiscent of his earlier, often introspective and personal, work. Upside Down Mountain is about self, and identity, and time, and wasting it, and particularly the time we waste trying to identify our selves, and the end of time, where our selves and identities stop making any difference.

On opening track, “Time Forgot,” Oberst seems ready to move to Walden Pond to contemplate these very things along with the ultimate life choice: “to be loved or to be free.” Though while trying to figure it out, he remains constantly conscious about his own self-aware bullshit when he says, “I’ll never know if I’m delusional, I just believe that I am not,” a play on the old adage of how “a crazy person will never truly know if they’re crazy.” How much sense is there to even spend so much time thinking about one’s mortality and place in the universe when the only thing we know for a certainty is that someday you’ll get “caught by death?”

In response, “Zigzagging Toward the Light” and “Hundreds of Ways,” two of the catchier songs on the album, seem to both be about sort of “figuring it out as you go,” rather than becoming paralyzed by the enormity of human existence. “Zigzagging” toward the light might be a representation of coping with changing circumstances to get what you want and “Hundreds of Ways” the idea that you only need to find “one” of the myriad means by which you can accomplish your goals. On its face, it’s a message of positivity, but it seems to be generated only as a result of requiring encouragement in the face of some rather daunting odds.

“Artifact #1” and “Lonely at the Top” are both love songs and the latter provides the title of the album when Oberst sings, “It’s lonely at the top, of that upside down mountain,” here, using the idea of a literal “upside down mountain” to metaphorically describe how one can appear to be at a summit, yet feel like they’re actually dwarfed under the immensity of the same. Oberst, again, notes how “freedom’s the opposite of love,” perhaps suggesting that love, and the raised stakes that come with it, is precisely the type of thing that makes someone’s place in the world seem that much more apparent and vital and worthy of consideration.

The exploration of identity continues in the third-person on “Enola Gay” where Oberst describes the life of a girl ominously nicknamed after the plane that dropped the atomic bomb. The idea seems to be that she’s so focused on her own personal struggle through life that she’s failed to recognize that that struggle is nothing more than a “flash of light,” comparable to the one produced by her eponymous aircraft, and it’ll only be a matter of time until she “vanishes like all the rest.”

Similarly, “Kick” is a character sketch, of a slightly less dire quality, that seems to be about RFK Jr.’s daughter, Katheleen “Kick” Kennedy. The song appears to be an effort to guess what life might be like for the modern-day version of the closest thing that America has ever had to royalty, especially when Kick Kennedy has seemingly made such an effort to be a “normal” person. Oberst reassures her that it’s not her fault and it’s our obsession for that lost “Camelot” of the 60’s that has her hemmed into an identity, which she never necessarily wanted, as he morbidly predicts that her “curse” will assure that she’ll “have a nice divorce and a cemetery plot in Hyannis Port.” Unlike “Enola Gay,” however, there’s at least the suggestion that she might “find her way out of it.”

“You Are Your Mother’s Child” is a bit of an outlier on the album and, at first, might seem like one of the most embarrassingly straight-forward and honest songs yet written by a man who’s seemingly been trying to win the award for “most embarrassingly straight-forward and honest song” for most of his career. On closer listen though, it’s a bit darker than it seems: a lament by a father that the good qualities in his son are only due to his mother’s influence, an oddly uncomfortable turn which isn’t revealed until nearly the end of the song. And things don’t get any lighter by the end of the album.

“Desert Island Questionnaire” might be one of the best songs that Conor Oberst has written in the past ten years. It’s a thematic torchbearer for the rest of the album that starts by posing the classic question about what you might bring with you to a desert island. It’s soon revealed that the person to whom the question is being posed doesn’t want “all this trouble, even hypothetical,” before the scene switches to that person “staring at their phone at another party.” The setting here is a bleak depiction of the social disconnect in the United States in 2014. People, indistinguishable from mannequins, drowning themselves in drinks and making toasts “to the ennui of our times, to the selfishness in everyone you know!” (I would happily invoke this toast this weekend if I didn’t fear it would only lead to MORE social disconnect and alienation.)

The second part of the song sees more reflection on this “human nature” by positing that even child murderers must imagine themselves to be, relatively, “good,” and that even when we are complaining we are “so bored with our lives” we’re “still afraid to die.” Oberst then flips back to the desert island question asked at the beginning of the song and if you’ve been following along, it’s hard not to take it a little more seriously at this point. What exactly are we doing here? What are we doing with our lives? What should we be doing? Perhaps, frustratingly, the song doesn’t really give any answers and that’s probably because, regardless of whether we’re self-conscious of these things or not, there might not be any.

The last song on the album, “Common Knowledge,” carries on Oberst’s recent tradition of ending albums with heart-breaking acoustic tracks (see: “Tourist Trap,” “Lime Tree,” “Milk Thistle”). The final statement here seems to recognize that, for some, one answer to the madness of life is “to go out with a bang like Hemingway.” Even the mere suggestion of suicide generally raises pretty strong responses, but Oberst immediately acknowledges this by ending the album with the lines: “some will say you’re brave, some will say you ain’t.” It’s a deceptively profound recognition that for every accusation of cowardice and “taking the easy way out,” there isn’t exactly a crowd of people lined up waiting to call Hemingway and Van Gogh and Virginia Woolf and Kurt Cobain and David Foster Wallace “cowards.”

It might just depend on what side of that “love v. freedom” argument you end up on, because no matter how difficult or overwhelming or pointless life can seem, it’ll probably never seem like enough time to figure it out when you’ve picked the former.