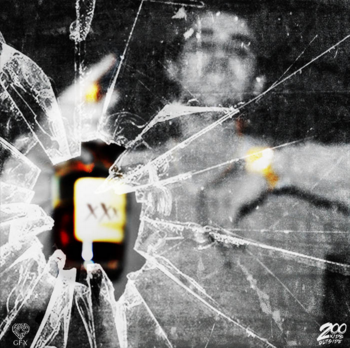 For being a relatively newer act, 200 Kids Outside have got their formula nailed down. It’s not a conventional one either. Across three projects dating back to last spring, the duo of producer Minel and vocalist Neetchy have been making music drawing from influences in alt-hip hop, southern trap and R&B, and have owned it the whole way. Minel’s been a maestro on the boards providing crisp production of varying styles for Neetchy’s signature melodic vocals which float between singing and rapping. YA’LL Need a Drink is a great seven-song taste of what the duo have been working on since last August’s AutoPilot.

Album opener “WiFi” sonically is a quintessential 200 Kids song. Minel takes no time getting into his vault of swirling synths and melancholic keys, and Neetchy’s layered vocals serve as the opening bell that their project is here. “I don’t wanna cry, but the water clears my eyes,” sings Neetchy, taking a surprisingly serious tone for a team that is known for having fun with their music. Their ear for catchy melodies is really killer, and a particularly notable one comes as Neetchy belts out “I’m a True Religion fiend” in the song’s body.

Second track “Time” is actually a Neetchy-produced cut, something that the vocalist has done a few times on previous releases. It’s a nice atmospheric track heavy on sub-bass and echoes (“It’s Neetchy..It’s Neetchy”), with a rapping chorus that really shines. It’s a testament to Neetchy’s abilities as a songwriter to make a catchy chorus from a rapping delivery when he already has great talent as a singer, but he saves that for the next track.

“Moonlight” is a mystical, if not spiritual experience. There’s a heavenly synth with a prominent role in Minel’s production here, and whenever it takes center stage it’s as though some sort of deity is looking down upon me with arms wide open, saying “It’s okay to let go Matt, come to me.” Minel also cleverly intersperses mid-2000s era Cascada-sounding fluttering synth horns and keys, adding pace to a song with a lot of long notes and chords. Lyrically “Moonlight” takes a positive, loving, and possibly tongue-in-cheek tone represented in the chorus of “Only the sky is above us.”

Minel’s expanded production chops are really shown off on”Basic Things.” The hand-clap heavy beat is a change of pace both on the project and in 200 Kids releases, as it gives off simple poppy vibes when their music usually thrives in its complexity. That’s not to say the beat is barebones the whole song either, as the underlying organ is a great touch in addition to a guitar feature on behalf of Justin Silvus that adds heaviness to the track.

The song with the most hype going to into my listen was “Pour Up the A,” which I had caught wind of on Twitter and also has the title consistent with something likely to be an exciting track. It did not disappoint. Minel cooked up a beat somewhere between Yung Gud and Metro Boomin and Neetchy’s spirited vocals cement the track as a Buffalo banger that could’ve came from the heart of Atlanta. Rapping-wise this is as rapid and hard as Neetchy has gone on, and he still expertly brings it back to those killer melodies and catchiness on the “Pour up the A in the city” chorus.

Ya’ll Need a Drink is another bankable project for the duo. It’s confidently and celebratory composed, and indicative of what 200 Kid’s music is all about. They’ve declared 2016 for them to be what the year 2009 was for Lil B. ’09 saw the Bay-area rapper begin his ascent to beloved personality and nationally successful artist, and hopefully the same will hold true for 200 Kid Outside. The BasedGod has also released like 90 mixtapes in the 6 years since 2009, so maybe that’ll be a byproduct of the the duo’s goal too as we’d all benefit from that. Peep below for a great listen.