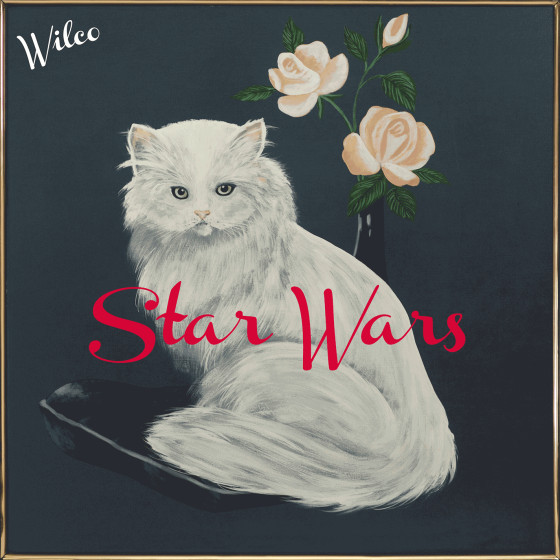 On “Cold Slope,” the 9th song off Wilco’s new album, Star Wars, Jeff Tweedy sings, “Some say you’re never really there, but you still take up space.” That line could be an indictment of the band over the past several years: touring endlessly but producing fewer albums.

After a decade of hiring-and-firing, Tweedy and co. have been in cruise control with the same lineup for over 10 years now. What kind of band is Wilco today? They have mostly abandoned their experimental skin (which was really credited to Jay Bennett), and have since been approaching Springsteenian levels with their marathon live shows, pulling from a deep catalog.

More and more, after 2009’s Wilco (The Album), which played out like a cheap greatest hits collection, and their last album, the uneven Whole Love, it seemed the band had reached their Grateful Dead moment: their studio albums don’t turn heads anymore, but their live shows still crush. Or has Wilco become today’s Rush, a group of really sick, technically savvy musicians who aren’t appreciated by anyone under 25?

Wilco does things on Wilco’s terms, though. They are their own beast, eschewing labels, throwing their own festivals, and now, dropping a surprise album. Remember, this was one of the first bands to throw their album up online, after Reprise famously rejected Yankee Hotel Foxtrot. The irony of it all was that a subsidiary of that label ended up buying the album back, and we know how that story went.

At first glance, you’d think Star Wars was the band engaging in some strange cosplay. The cover looks like it’s out of a Wes Anderson film, and some of the titles – “Pickled Ginger” and “The Joke Explained”- seem like inside jokes. Even hearing “EKG” for the first time, the jittery opening instrumental, I thought, “Oh no, where is this going?” But then came, “More,” with a soaring chorus that has the wing span of a bald eagle. This album is for real.

After going through a rough patch where his wife underwent cancer treatment, Tweedy emerges a lot more at ease. On “Random Name Generator,” he sounds so giddy that he wants to “name every new born child.” This album may be Wilco at its fuzziest and tightest. Most of the songs clock in around three minutes, featuring acoustic guitars low in the mix, and a lot of rubbery Nels Cline riffs, but no solos. Whereas Cline at first was allowed to shred to unprecedented levels on Sky Blue Sky, his presence seemed to become an anomaly for the band. Here though he fits in with he rest of the players like a puzzle piece.

Comparisons have been made to music made by the Wilco mini-me project Loose Fur, which featured Yankee Hotel Foxtrot mixmaster Jim O’Rourke. “You Satellite” swells up for five minutes, perhaps the most YHF-y song on the album, while “Taste the Ceiling” is where Tweedy is at musically these days, maintaining his hushed, closed-mic vocal that was present on Sukierae, his 2014 solo album with son Spencer.

There are no songs here that go for the gut, like “Via Chicago” or “Reservations.” And that might be the biggest thing missing. But that’s OK. We’ll always have those songs to turn back to.