Wavves X Cloud Nothings – No Life For Me 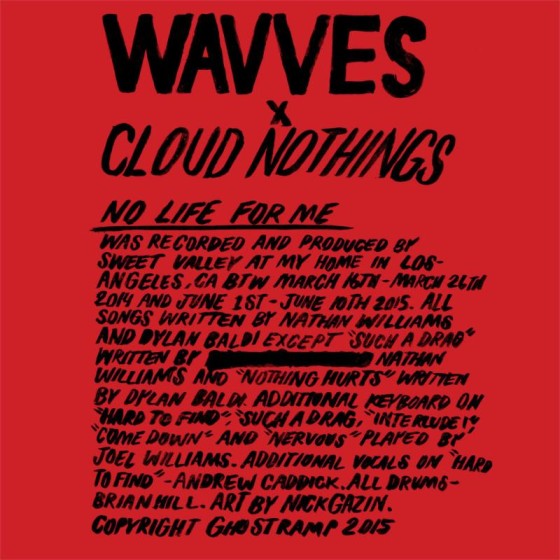 If you were up on Sunday night around midnight, you may have been pleasantly surprised by something on the internet. No, it wasn’t an admission from one of your facebook buddies that he was in fact, totally in the wrong about having a confederate flag vanity plate on his Silverado. It was, however, the “surprise” release of the collab album No Life For Me from Cloud Nothings and Wavves.

If you were paying attention a while ago, you did know that this project was going to happen. However, the release date was kept a mystery until Sunday night when it appeared on bandcamp (and on iTunes). It won’t have a true physical release, but if you really want a hard copy of it, it will be available on vinyl. Who collects CDs anymore anyways?

The album takes a somewhat surprising step back into the lo-fi roots of the two bands. Produced by Sweet Valley (Nathan Williams and his brother Joel), the brief, 9-track album is all sorts of warm and fuzzy surf-punk rock and quickly becomes perhaps the best release thus far on Williams’ label, Ghost Ramp. Williams and Dylan Baldi’s styles mesh together just as well as you’d think they would. The classic Cloud Nothings’ build ups still find a way to find themselves into the songs, with the no-holds-barred heavy distortion of Wavves classics equally prominent.

The title track is number 7 on the list, and is one of the strongest. It comes in with a couple of heavily distorted bass notes; the drums kick in right away and keep the fast pace going.
Joel Williams makes his presence felt on the album with his keyboards. “Untitled II” is pretty much his song, featuring a distant keyboard riff surrounded by shrouds of foggy feedback and distortion. The track really fills out the middle of the album, giving us a break from the hard hitting and relatively uniform drum beats that fill out the rest No Life For Me.

That song gives way to “Nervous,” which features a good chorus donning voices of both Baldi and Williams. Another Cloud Nothings build-up leads way to a pretty simple chorus of a couple lines, and then dies out quickly in a cloud of harmonics and a fading drumbeat.

The album is short, simple, and sweet. Not many bands are able to pull off the 22-minute fuzzy fun-run, and this Wavves x Cloud Nothings does it well. Despite the drums being pretty uniform throughout the whole thing, the loveable surfy songwriting shines through on this one. It’s a good high energy album just in time for your fourth-of-July punk-rock cookout.