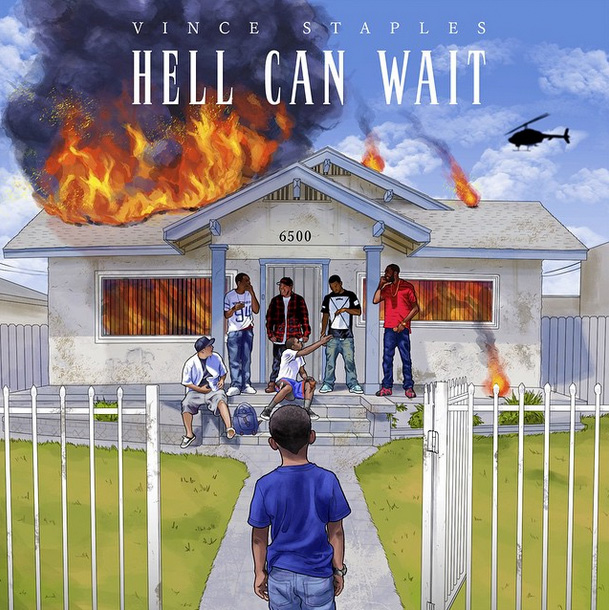 One thing that can be said about Los Angeles rapper, Vince Staples, for certain is that he does not have a bad verse to his name. Although he is a friend to the Odd Future crew, musically he couldn’t be more different. The 21-year-old has the soul of one of his West Coast gangsta-rap forefathers, notably rapping last year on Earl Sweatshirt’s “Hive” “If this was ’88 I would’ve signed to Ruthless, ‘9-4 woulda had me walking down Death Row,” a nod to some of the most famous, dark labels in hip hop history. Whether it was on either of his Shyne Coldchain mixtapes or last year’s Stolen Youth, a collaboration with Mac Miller’s production pseudonym Larry Fisherman, Staples has consistently brought introspective gangsta rap to his bars. Hell Can Wait continues this style, and this EP is a strong prelude to the debut album that Staples says is coming next year.

Buzz for this project began to build with Staples’ release of “Blue Suede,” an unapalogetic ode to Cripping on a Long Beach block. A twisted West Coast whistle serves as the background as Staples reflects on what he’s seen during his all-too-real childhood as a kid to gangbangers. With bars like “Half these hoes chauffeurs, half these hoes useless/Fucked the face toothless, easy, so ruthless/Ask where he from then leave his dome roofless,” Staples keeps to his gangsta image, but also flexes undoubtable talent as a lyricist. He’s similar to Freddie Gibbs in that regard.

While the EP is certainly West Coast-gangsta, it also has jazzy undertones. A muted trumpet eases us into a piano loop emulating a late 90s  Mobb Deep album on the second track “65 Hunnid.” This track plays on the ruthlessness of gang violence, and Staples toys the line with whether or not he questions it with lines like “Don’t shoot for the skies or shoot for his soles/I told you before/That n****s gotta die for this shit to survive.”

Perhaps the best and most politically driven song on here is “Hands Up,” a commentary on police brutality that perfectly demonstrates Staples’ ability to be equal parts hard and smart. Questioning the morality and motives of the officials meant to serve us, Staples explains the loss of trust with the police experienced by black America, culminating in the final couple bars “Raidin’ homes without a warrant/Shoot him first without a warning/And they expect respect and non-violence/I refuse the right to be silent.” That’s Staples at his best, being thoughtful while still using the medium of gangsta-rap.

While only seven songs, Hell Can Wait still is filled with powerful pieces of music and can serve as the perfect introduction to a talented young artist. It also has beautifully poignant album art, as seen above. In my opinion, ScHoolboy Q’s lost his spot as a new age gangsta rapper but with artists like Gibbs and Staples consistently bringing quality material, the subgenre is in great shape. Peep the awesome vid for “Blue Suede” below.