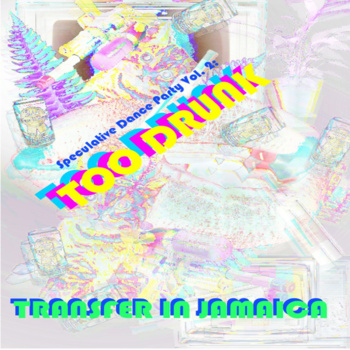 Known for eclectic, scatter-brained mixes and mashups, Buffalo artist, Transfer in Jamaica, brings together disparate tracks, shifting tempos and vocal pitches as well as placing club music side by side with more introspective genres like post-rock and ambient.

The latest release from the artist, titled Speculative Dance Party Vol. 2: Too Drunk, continues this trend as an afro-beat intro leads to a track from Bow Wow and Ciara, creating an interesting juxtaposition to say the least, along with the sample of American composer Philip Glass which lays atop Flo Rida and T.Pain’s “Low.” The mix is separated into six parts each containing r&b and hip hop hits as well as more underground electronic productions from Caribou, Nicolas Jaar, Pantha Du Prince, and Burial.

Transfer in Jamaica opens up a world of warped pop culture as a glitched-out track from pop singer Britney Spears begins one of the mix’s, blending hazily into the first verse of Kendrick Lamar’s “Money Tree’s.” With many rises and falls in energy and mood, like a transition from Lil Jon to The Beatles’ “I Want You (She’s So Heavy),” the artist creates a dynamic listen as a catchy, unexpected sound is never too far ahead in the mix.

Containing some of the most memorable hip hop and r&b tracks from the past few years, along with tracks from more niche scenes and genres, Speculative Dance Party Vol. 2 presents these sounds in a succession that creates a musical conversation that while at times is cluttered, allows seemingly unconnected styles of music to co-exist in a world where the underground is no more distinguished than the instant-gratification manner of pop music.