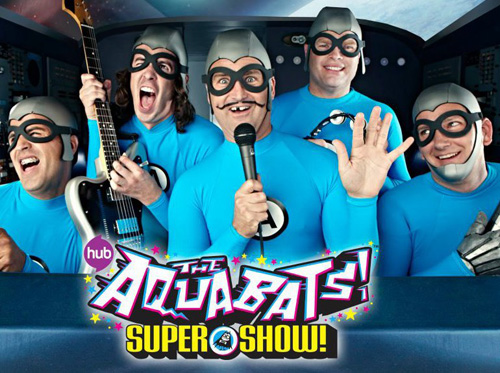 Everyone has their cultural/musical touchstones and if I were to point to one of my earlier ones (we are talking late 90s’) I would have to point to the Aquabats. In Middle School, I found very little to identify with in the alternative music that circulated among 13 year olds in ’98, I was not particularly dark or edgy but I was still alienated all the same, it was just a goofier kind (see: young nerd). So when I heard the Aquabats, specifically their first two albums, something clicked. Awash in a campy California aesthetic that was equal parts 60s’ Batman as it was third wave ska, I was instantly drawn to their songs of martians, powdered milk and forlorn crushes bathed in blaring poppy horns and rapid tempos.

Even if I started to lose track of them as time went on and my taste shifted, I still returned to their records and found they held up well for me. In recent years, the band has continued on and gotten a children’s show off the ground, still releasing records and never really seeming to get cynical or jaded. There is something to be said for a group who successfully maintains such an entertaining and consistent aesthetic after almost 20+ years.

Tonight, they are playing the Town Ballroom as part of their 20 year anniversary tour and I am guessing it will be a really fun show. Unfortunately, I am traveling for work this week but I think you should go…for me. So please go skank to music about space aliens, costumed crime fighters, and pizza…because really, all of that sounds awesome!