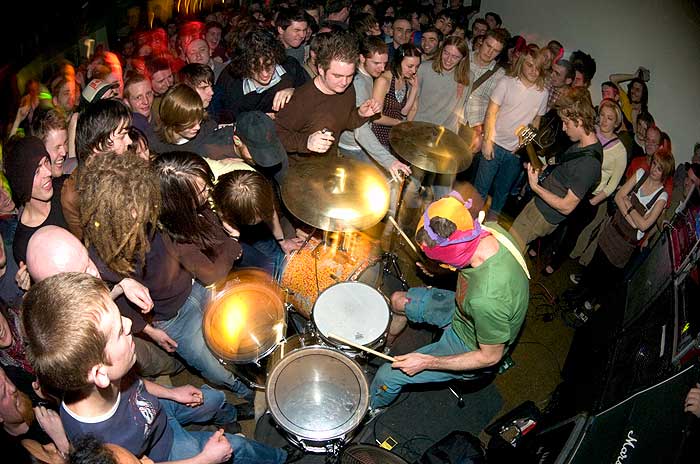 Tonight’s Lightning Bolt show at Mohawk Place may be so sold out. There were ten tickets for $15 each left at midnight, so if you haven’t already purchased a ticket, now is your absolute last chance. I really encourage you to do so because the last time Lightning Bolt was in town, it was absolutely bonkers and amazing.

Lightning Bolt have recently released their first album in over 6 years, Fantasy Empire, through the always solid Thrill Jockey records. Lightning Bolt’s music is a blistering attack of noise and sound but, as their live performance makes abundantly clear, one in which the duo has total control over. This is as much a physical accomplishment as it is a musical one and you have to wonder how they manage to keep pace with what they are doing and how they don’t collapse from exhaustion after a few songs. If the show they played at Soundlab a few years back is any indication, seeing them live is an exhilarating experience.

Rounding out the bill is METZ, noise punk upstarts signed to Sub Pop. Set to release their sophmore record, METZ II, in May, the Toronto band make for an appropriate and excellent opener to what is sure to be a great night of noise. You probably won’t be able to hear anything tomorrow, but it will be worth it. Doors open at 7pm.