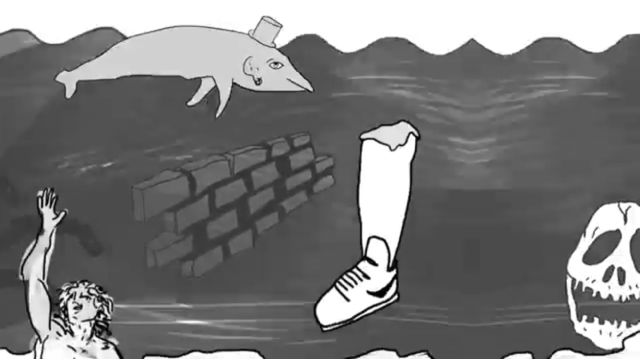 Speaking of lineup changes, Sleepy Hahas has gone through a bunch in the group’s four year existence, most recently losing long time drummer Steve Tripi and is currently operating with its third bass player. We think? Anyways, the frequent changes have not stopped the band from refocusing its sound once again and dropping its latest song, “Deep River,” the first single from the group’s forthcoming, 11-track LP, From the Bottom of a Warm Lake, earlier this morning.

Recorded with sound engineer Drew Vandenberg, whose impressive resume includes work with Deerhunter and Toro y Moi, “Deep River” is an industrial tinged cut of psych rock, maybe something Nine Inch Nails and of Montreal would record together it they collaborated. The track is long way from the group’s early sounds of Arctic Monkeys-esque garage rock, and is a further example of never knowing what to expect from Sleepy Hahas, not to mention who is manning the bass.

The wrapped and slightly unsettling, Jason Harvey directed music video for “Deep River” premiered on Performer this morning. Watch it below.