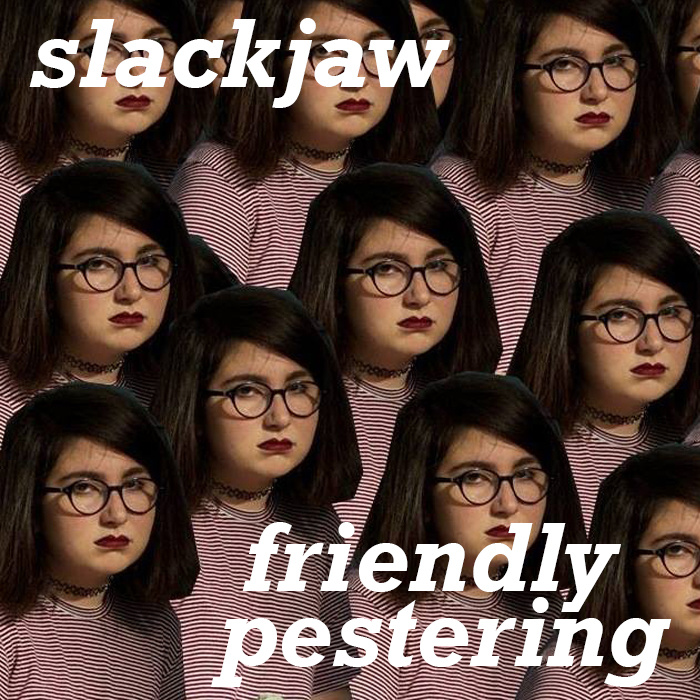 You’ve got a friend in slackjaw, and not just because their bandcamp URL says so. The Geneseo quartet’s catchy blend of garage punk and slacker rock has a pleasantly affable vibe to it, an air of innate approachability. Their self-appointed description is “weekend rock,” which I think they wear well. Start with the indie charm of Waxahatchee or Lemuria, add a little Pumpkins-esque crunch, and just a dash of late nineties emo influence, and you’ve got yourself some slackjaw. The band just put out their first release a few short days ago, the wonderful friendly pestering EP, already earning a bit of buzz and some heavy rotation here at the blog. I’m happy to crown friendly pestering buffaBLOG’s Album of the Week.

It didn’t take very long to warm up to the songs, suffice to say that’s what the band was going for. Singer Ella Mosco delivers lyrics with an engaging disinterest that gives each track a unique personal allure. This allure is particularly evident on “green,” in which Mosco sings gloomily over a jangly progression played with flavor by guitarist Jacob Kotler. “I’m a restless kid with restless needs / and a deep disdain for endless grief,” sings Mosco, hitting home in places we’ve all been before. Friendly pestering excels at highlighting those special little nuances of life that often times go woefully unacknowledged, much less sung about.

Each of the EP’s five songs is notable, from the surfy juvenility (and that guitar solo!) of “palisades mall,” the male / female vocals and fuzzy breakdown of “sonny,” and the melodic pep of opener “room’s not clean.” Closing track “blue house” pays homage to—or purposefully curses, rather—inescapable feelings and the inner tickings of a preoccupied mind at an uncomfortable house party: “shuffling around inside, trying to find a face I recognize/ but I don’t, so I’ll just smoke cigarettes alone.”

Lonely but inviting, melodic and baggy in all the right places, friendly pestering lives up to its title. It’s the voice in the back of your head, doubt, reason, and justification; all of the above—delivered on a foundation of nostalgic progressions, tuneful hooks, and controlled blasts of grit. Give “green” a go below, then visit their bandcamp page, download the album, and make a new friend today. Like I said, slackjaw’s got your back.