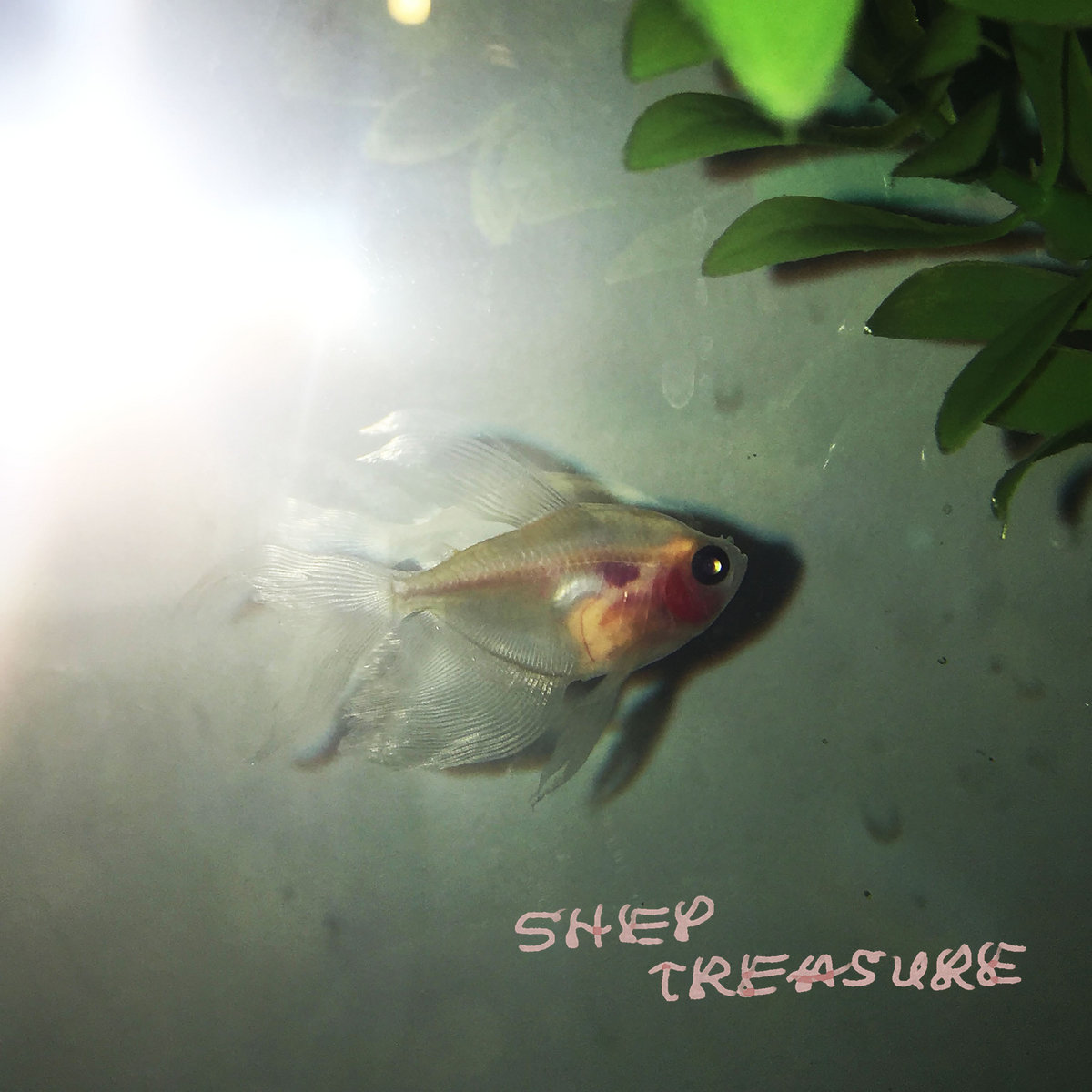 Sunday morning, a few hours after a long night out, I lay flat on my back in my new, sparsely furnished apartment, the snow-reflected Sunday light streaming through the windows – a big departure from the glass-block filtered sun of a previous basement apartment. I zoned out with my eyes glued to the wall above my bookcase, and “Nothing” by Shep Treasure was stuck in my head. The next night, wrapped up in a quilt, I once again found myself spacing out, this time toward a cat toy on the floor, and “Friday” was playing in my mind. Rochester indie pop trio Shep Treasure’s debut, self-titled EP is our Album of the Week, and it won’t leave me.

Frontwoman Sabrina Nichols has been narrating my thoughts for a few years now. This is her second time landing Album of the Week, the former being in the days of a previous project, Slumbers. After I learned about them from a fellow audience member at an Advance Base show at Rochester’s Small World Books, their first – and only – EP,  Come Over, quickly became one of my favorites. The sound was laid-back and comforting, and the lyrics were relatable to the point of feeling like I could’ve written them in my own journal. The only disappointment was that this was all Slumbers had released, and though they talked about releasing another album, it never came.

Three years and some change later, Shep Treasure has stepped in to fill the void, though they’re shaped a little differently. The subject matter is still sharply personal, and the melodies are still sweet and catchy. Nichols leads with familiarly hushed vocals and ambling guitar, but these signature elements, mixed with John Lewandowski’s drums and Tiger Adams’ bass riffs, form something refreshing and completely separate from what we’ve heard before.

Shep Treasure’s sound is, in a word, pleasant. The chord progressions are straightforward, and each song is relatively upbeat. The band fleshes out stark song structures by layering multiple guitar tracks and bringing the bass lines forward, often breaking into some groovy and unexpected riffs. It’s cohesive, but touches different ends of the indie spectrum; at times the sound leans more toward pop, and at others it errs on the side of rock, even showing some influence from Midwestern emo. All this mixed with bright, rhythmic drumming and the occasional glowing synth patch makes for a sound you’d associate with so-called good vibes. Even the slower, syrupier moments – like the beginning of opener, “Dirt” – eventually expand into radiance.

The EP would almost work as an instrumental endeavor, but the real glue of the project is a combination of Nichols’ calming, layered vocals and tender lyricism. We hear about relationships, self-consciousness, self-doubt, vomit, and anti-anxiety medication – a list that barely scratches the surface of the topics covered in just the words of “Nothing.” As listeners, we feel like we’re on the receiving end of a one-sided conversation, but many of us likely also feel like we could be the ones speaking.

All elements of Shep Treasure’s debut are crucial to this balance between light and dark. We’re forced to confront the darker side of young adulthood in the lyrics, but the relaxed instrumentation and airy harmonies cushion the blow. There’s a reason this EP is in my heavy rotation right now – it’s comforting to know someone else has the same worries you do, all wrapped in an endearing indie pop package.

Shep Treasure’s debut EP is now available on all streaming platforms, as well as below.