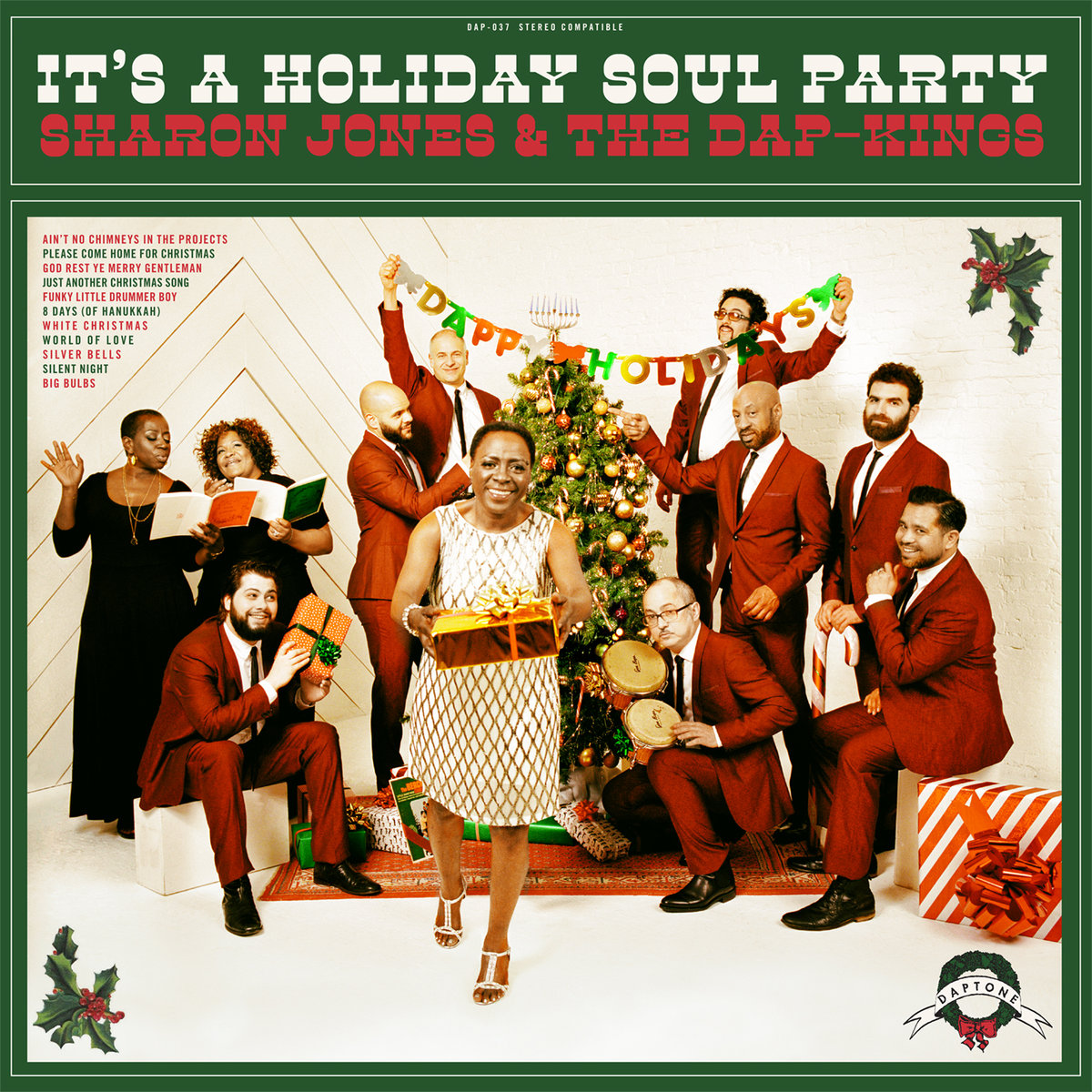 It’s not that holiday music stinks per se, it’s the fact that holiday music is bloody ubiquitous for a solid month; weaponized against us every time we go into a store (notably, except for The People’s Wegman’s on Amherst St). There’s also a lot of terrible holiday music out there, which doesn’t go well with the whole ubiquity thing, a shame considering most music fans have a holiday music stash of their own they annually retreat into. Beach Boys Christmas singles, “Christmas In Hollis,” Mr. Hanky’s Christmas Classics, Flaming Lips’ psychedelic Yuletide jams… we’ve all got something  that makes our ears feel warm and fuzzy in the month of December.

Enter It’s A Holiday Soul Party, the latest from Daptone Records stalwarts Sharon Jones & The Dap-Kings, a dynamite multi denominational collection of holiday classics that provides some serious emotional release while showcasing the incredible range and power of Miss Jones, and her fine backup singers. One of the most versatile voices ever, whether she’s wailing with the power of Aretha Franklin or burning like Tina Turner, Sharon Jones is force of nature here. A greatest hits of holiday soul music, this is a record that lifts you up, dusts you off, and puts it’s arm around you saying “we’re going to be all right.”

In a move that would give Bill O’Reilly heartburn, “8 Days Of Hanukkah” gets the album started right with a breezy and sweet city jam that climaxes with and dramatic horns and an insurgent tempo that says this is serious business. The mighty spirits of James Brown and Bill Withers are invoked in “Ain’t No Chimneys In The Projects,” a different kind of holiday song that’s entirely of a piece with the plethora of holiday singles released throughout the 60’s and 70’s by soul and r&b  acts. Socially and socioeconomically aware if not downright bleak, it’s also rather magical, offering a beautiful explanation of how Santa Claus gets the job done for everybody.

A scintillating, up tempo “White Christmas” is one of the album’s many highlights,  an irresistible Ike and Tina Turner style rave up that not only showcases the airtight grooves of the Dap-Kings, it allows Miss Jones to let it rip like the mighty Tina herself and make “White Christmas” all her own. “Just Another Christmas Song” is a Homer Steinweiss original that pays homage to and sends up every Christmas song ever while giving a subtle glimpse into what it’s like to be Jewish during Christmastime, while “Silent Night” is straight up Chicago blues, and you guess it- Sharon Jones crushed that one too.

“Big Balls” (a nod to AC/DC?) calls to mind the sounds of New Orleans, stripping it all down to Sharon, her backup singers, a guitar, some sleigh bells, and a trumpet that syncs up to your soul. If”Please Come Home For Christmas” finds that sweet spot in between gospel, the blues, and soul, the “Funky Little Drummer Boy” finds it between such disparate elements as the funk of James Brown and European choral music. “Silver Bells” starts off with some serious gospel, just Sharon and a piano before launching into a Spectoresque 60’s girl group jam, and “World Of Love” features Dap-Kings guitarist and bandleader Binky Griptite channeling the eternal glory of Sam Cooke.

It’s not going to save Christmas or redeem the genre, but It’s A Holiday Soul Party is a marvelous showcase for the wonderfully versatile voice of Sharon Jones… one of the finest voices this country has ever produced, and for the equally versatile house band for one of the most vital indie labels on the planet, the Dap-Kings. It’s also good for the soul, and that’s all that matters during these trying times and stressful holiday season.