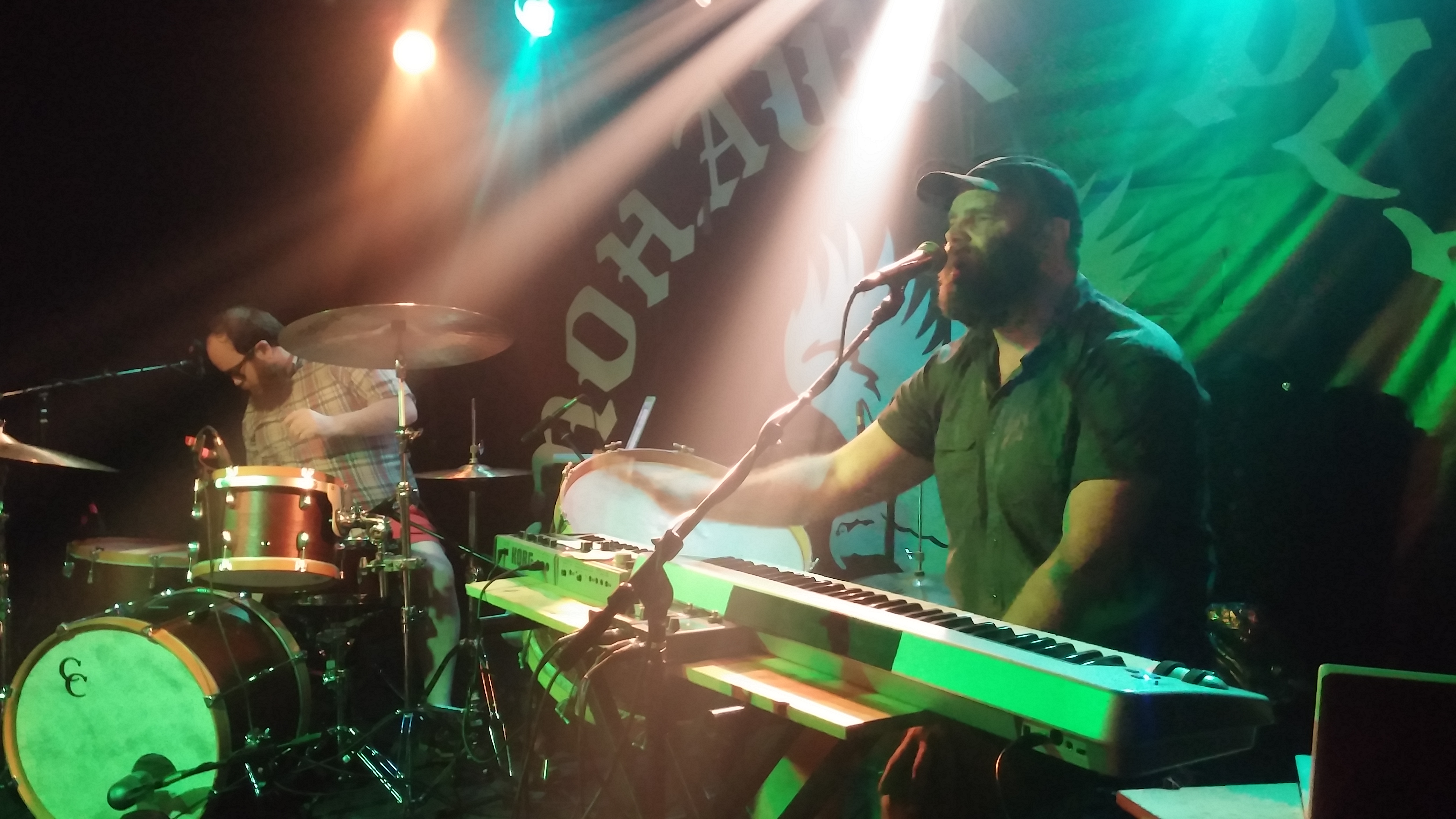 If you missed Pattern Is Movement last night, you didn’t miss a show, you missed an opportunity to hang out with a couple of really cool guys. Andrew Thiboldeaux and Chris Ward, the two members of the band, are nearing the end of the project, and made one last stop at Mohawk Place last night that was nothing short of intimate.

As the forgetful, muggy, and grey Buffalo summer day drew to an end, and a light crowd slowly filled up the reddish insides of the Mohawk, three drum sets sat at the stage in the back of the venue, which probably broke some sort of drums-per-capita record inside the venue as the only other instruments up there were the two keyboard-synths Thiboldeaux would later sing through.

CCDS (Death Squad) ended up being tapped in as the opening for Pattern after a whirlwind of changes to the opening act, and the pair wowed the small crowd with its simple setup: two drum kits and a sparsely used synth pad. The duo of Cameron Rogers and Amber Kogut (self described as a sci-fi/horror band) effortlessly put together an excellent 5-or-so song set that went off without a hitch. The two barely made eye contact as they traded drum fills back and forth for 25 minutes. They’re definitely a niche local act worth looking out for.

And then there was Pattern Is Movement. In what was the band’s third-to-last show ever, PIM absolutely killed it. With a set that lasted for about an hour, the group stuck to primarily songs from its most recent (and sadly, final) self-titled album. Thiboldeaux and Ward quickly got things moving with “Little By Little,” keeping up with the energy that CCDS had given to the bar an hour earlier.

For how mellow the sound of Pattern Is Movement can be, the show had a good amount of energy. Andrew never looked comfortable sitting on his stool at his keyboards, floating around between vocoder, keyboard, and the big drum tucked over to his right. He delivered vocals with the emotion and distinct power of Beirut’s Zach Condon, combined with the vocoding and soulful layers of a Justin Vernon project.

The highlight of the show was, of all things, a D’Angelo cover. Andrew belted out the falsetto R&B jam “Untitled (How Does It Feel?)” with absolute perfection, and clearly had fun doing so. The band closed out with “River,” a dance-friendly number with more Bon Iver-esque layering, an energetic drumbeat and some dissonant keyboard chords, that eventually fell off into just a single electronic tone.

And then it was over.

Immediately after the show though, Andrew and Chris just hung out with everyone, answering questions about their impending drive down the 90 all the way to Boston, how they make their music, and what their plans after the band are. Andrew gave almost everyone that had just watched him play a hug. He also talked to a few audience members about what they did, truly interested in what his fans were doing with their lives, whether they be musicians or not.

As for future plans? The two are going to work on recording other projects and keep doing the music thing, whether it be playing DJ (Chris told us he’s working a wedding next week), recording with other projects in Philadelphia, or working in some other facet of the industry.

As the rest of the city was shrouded in fog and sporadic rain, the inside of Mohawk was a happy, warm place last night, and we hope Chris and Andrew come and hang out with us in Buffalo sooner rather than later with new music to share.