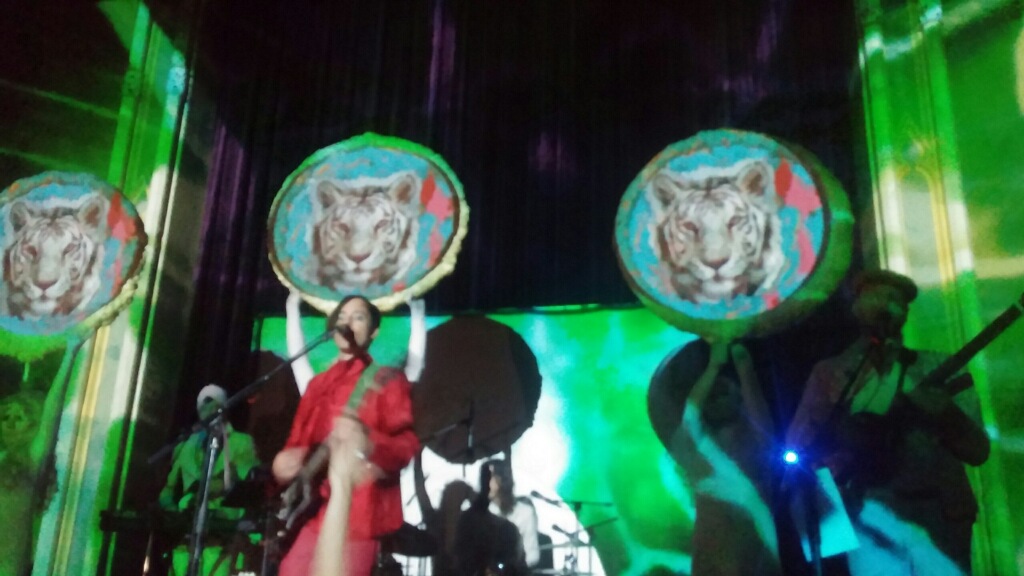 The always ambitious of Montreal avant-garde freakshow rolled through Buffalo for it’s annual visit, this time in the post religious sanctuary space that is Asbury Hall at Babeville, and for the brave music fans who left the safety of their homes on a Monday night, it was a glorious night to thoroughly get their ya-ya’s out- physically and otherwise.

I really wanted to like of Montreal’s opener, especially because I usually dig their openers (Janelle Monae, Dream Tiger, Kishi Bashi), but Surface to Air Missive failed to excite When they veered into early R.E.M. territory, things looked up, but their predilection for 60’s jam band guitar noodling and staring earnestly at each other while they played became turnoffs. Their vocalist/rhythm guitar player did sing his heart out, putting the hammer down mightily on his throat muscles to hit some impressive falsetto notes, and I had to appreciate the effort, because a hernia operation is definitely in the guy’s future.

After a brief interlude and an invocation from master of ceremonies (and of Montreal’s resident visual artist) David Barnes, guru/shaman/brother of David/mastermind Kevin Barnes appeared, strapped on his guitar, and of Montreal unleashed  their show upon the sparse crowd with joyful abandon, ripping into the dark funk of “Bassem Sabry.” Projections covered almost the entire front wall of the church: the band, the speakers, the quaint screen behind the drummer… everything was a screen to contain some form of visual wildness that didn’t let up until the very end.

There were lights and images flashing across entire fields of vision. There were dancers that alternated between androgyny and hyper sexual caricature, riling up the crowd with their ever changing antics and holding up and or becoming screens themselves for projections, including a cameo by the Grand Idiot himself Donald Trump (looking especially baboonish) that amused the audience tremendously. And of course there was a point to all of it whether we absorbed it or not, creating a sense of data overload to go along with the always pleasing of Montreal sensory overload their beautiful fans live for.

Classics like “Suffer For Fashion” and “Requiem For O.M.M.2”  kicked off the many dance party moments of the night, but I really enjoyed how Kevin Barnes utilized his newer songs off Lousy With Sylvianbriar and Aureate Gloom (“Empryean Abattoir,” “Like Ashoka’s Inferno Of Memory”) to push the show into darker, more apocalyptic tones. Even the vintage stuff during the middle third of the main set like “Beware Our Nubile Miscreants” added to the mounting psychic tension that built until it found exquisite, ecstatic release during Skeletal Lamping’s wickedly sexy “For Our Elegant Caste” and the big finale of “The Party’s Crashing Us,” “Gronlandic Edit.” and “A Sentence Of Sorts In Kongsvinger.” This was the curated communal freakout that makes of Montreal shows so truly special.

Some audience members were overcome by the psychic and emotional fallout. Some laughed like kids on Christmas morning. Pretty much everybody danced  with utter abandon. The encore only contributed to the primal chaos, with a super freaky “Bunny Ain’t No Kind Of Rider” that managed to take the sensory overload to yet another level, a reckless disco funk workout to “Id Enlarger,” and a darkly sensuous “She’s A Rejector” that reduced of Montreal’s beautiful tribe to a sweating, writhing mass of humanity before it was all over.

Even as the house lights came up, the crowd didn’t make for the exits: many just basked in the warm afterglow, some understandably chanted “ten more songs!” in vain, while some just sought to put themselves back together before re-entering the real world beyond the sanctuary of Babeville. Many also thronged the merch table to work on their of Montreal CD and vinyl collections, snag a tasteful poster, and peruse the lovely selection of twisted ceramic art of David Barnes (I snagged an excellent live double album that fueled the writing of this review).

Ah, the annual of Montreal shared experience freakout was everything: a riot of sound and vision and liberated humanity that pushes all in attendance over the brink and back again. Babeville was the almost perfect venue (I’m still iffy on the dubious acoustics in Asbury Hall) for the of Montreal bacchanal experienced Monday night, and I sincerely hope it returns again next year, in spite of the fairly paltry yet thoroughly exhilarated crowd (Monday night must be TV night for the over 30 set).