Newish Star – How Soon We Forget 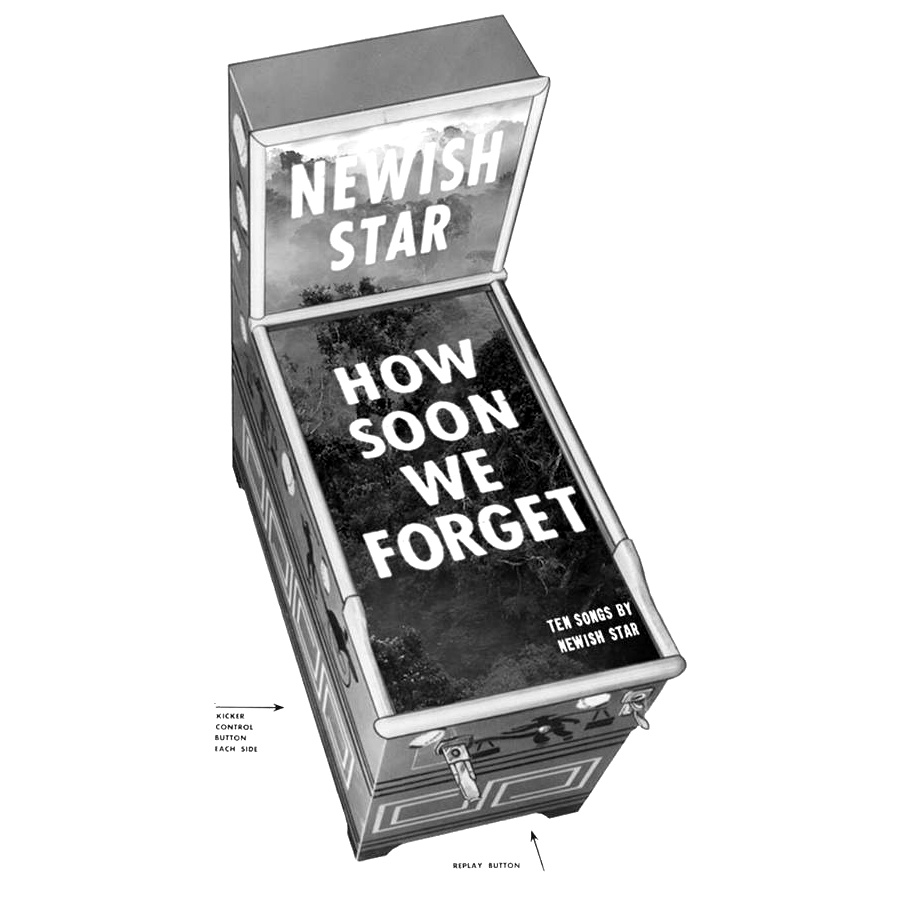 There’s a certain word that comes to mind when I think about the genre of pop-punk: “bratty.” In this context, it’s a compliment, or at least not an insult. Good pop-punk tends to come with a sneer and a stuck-out tongue, the objects of its quasi-ironic, sometimes petty derision usually the self, and then everybody else.

That’s not a huge emotional range, and really good pop-punk often cleverly plays with those limits. It’s those kind of moments that make Newish Star’s new tape, How Soon We Forget, especially interesting. Musically, it’s in the same ballpark as their past releases, but past the power chords, the slightly-off vocals, and the driving drums is a level of nuance that serves as evidence of growth.

The very first moments of the tape serve as a pretty good metaphor for where the band’s at. It’s a recording of the trio between songs at a show, presumably in Kutztown, PA. Singer/guitarist Jordan Nittoli, in an earnest mumble, says to the assembled: “There’s a whole lot of fireflies out in Kutztown. I think it’s pretty beautiful.” A girl from the audience offers a half-hearted yay; some dude half-heartedly tells him to shut up. He replies, also half-heartedly: “Fuck you. Let’s play this show.” And everybody shares a laugh.

It’s an interesting moment even if it isn’t all that serious. You’ve got the punk singer breaking character to offer an opinion about the beauty of the lightning bug, the audience not really knowing how to react when the expected irony is awkwardly, understatedly undermined and then the return to form: a “fuck you” right before the drummer counts the band into a song that, on the tape, is about pissing blood.

Throughout How Soon We Forget, that’s the dynamic. The second song, “Salt Water Tank,” dramatizes the doctor’s waiting room, balancing free-floating anxiety with someone telling Nittoli that he’s “doing fine… now is not the time to hit rewind.” You expect some kind of angsty conclusion to this story: maybe the doctor tells him he has 5 days to live, or that he’s a neurotic moron, but no dice. Much more relatably, the anxiety keeps floating and we’ve just got to sit with it.

Or take “Penguins,” the next track. The band’s playing “another gig in the basement” and the crowd looks like “penguins in the snow, huddled around.” Nittoli’s mind takes him out of the moment and on a journey as he starts to wonder if any of them will even still be around in five years. He watches a man pace like a “lion on vacation,” anxious and socially uncomfortable to the point of rage. He ponders his ability to survive without the trappings of modern society, admitting that he’s never even changed his own oil.

And that’s it. There’s no cathartic moment where he realizes that being in a band and playing a basement gig is all you need, or even that society probably won’t implode, or really any kind of closure. Instead, the paranoia conjured up by his wandering mind exists side-by-side with the present moment, and despite the absurdity of playing a basement show when the world might end without warning, they co-exist, however tensely.

It’s not that Newish Star’s past releases all end in conclusive clichés. But they don’t acknowledge the weirdness of being alive quite as completely. Look Both Ways might traffic both in the strangeness of day-to-day life and the absurdity of life itself at points, but it never really does both at the same time quite as well as How Soon We Forget does.

What appears on both releases, fortunately, is pinball. How Soon We Forget really only has one pinball song, but it’s the musical high point of the album: “Casino Run.” It’s maybe the most high energy song the band has ever put out, nearly tripping over itself with pounding drums and a buzzing guitar hook. And it’s all pinball, as far as I can tell.

I don’t know if I’d say that Newish Star has matured with this release, necessarily, and that’s a good thing. Musically, How Soon We Forget picks up where Look Both Ways left off, and besides, there’s something weird about the idea of an overly mature pop-punk band singing about pinball anyway. But there’s a nuance here that breaks with the archetypal brattiness of the genre, even if it never leaves it fully behind. That nuance has led Newish Star to grow more relatable and more relevant, and if that’s in tension with our expectations, it’s a productive tension for sure.