MS MR and Gang of Youths 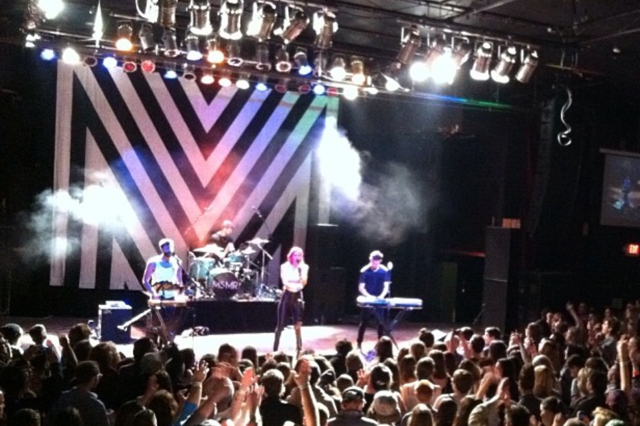 While the most buzzed-about event in our fair city this weekend was undoubtedly the NCAA Men’s Basketball Tournament games taking place at First Niagara Center, it’s unlikely that anyone had a better time than the folks who were at the Town Ballroom on Saturday night, where indie-pop phenomenon MS MR performed an excellent set, along with sport from Gang of Youths, a talented, anthemic rock band from Nashville. MS MR – the New York-based duo of Liz Plapinger and Max Hershenow, who met while attending Vassar College – scored a major alt-rock radio hit with “Hurricane” and appear to be poised for big things in the near future. Saturday’s excellent show certainly gave the indication that they are headed in the right direction.

While the performances from both acts were top notch, the people in the audience deserve some credit for the evening. The crowd was thoroughly into it throughout the night, cheering heavily for both acts. When technical problems became an issue in Gang of Youths otherwise excellent set (note to the crew at Town Ballroom: why did you turn the Syracuse-Dayton game on before they were done playing?), the crowd not only wasn’t bothered by it, they actively encouraged the group to soldier on through it and continue. What followed were their two best songs of the night, and while their set wasn’t as long as some of us might have liked, there’s a good chance of lot of folks who only showed up for the headliner made a point of googling Gang of Youths after the show was over – they made a very positive impression on everyone.

After a relatively short break, MS MR took the stage, and immediately had the crowd hooked. It seemed that a good amount of the audience was already quite familiar with the numbers from Secondhand Rapture. When they went into “BTSK,” an audience member could audibly be heard calling it her “favorite song ever.” The band frequently made note of the contrast in styles between various songs on the album. When they went into the electric “Fantasy,” Plapinger referred to it as the “dance party portion” of the concert, and the crowd helped to confirm this by creating quite a ruckus on the floor. When Plapimger introduced the better kiss off “Think of You,” which appears to be the next single, she described it as being a sort of therapy session for both the band and the audience. Sure enough, as the crowd sang along to the swear-filled chorus, it was the most cathartic moment of the evening.

Since the duo has just one album to their name, there was a limited number of selections to choose from, so they naturally dipped into the cover vault. The two non-original songs of MS MR’s set were excellent renditions of Arctic Monkeys’ revelatory single “Do I Wanna Know?,” as well as a stunning cover of LCD Soundsystem’s “Dance Yrself Clean.” While the former did fine job of capturing Alex Turner’s potent mix of anguish and lust, the second cover was the highlight of the night. James Murphy’s lyrics were granted additional power by Plapinger’s evocative delivery. Murphy disbanded LCD Soundsystem before I had the privilege to see them in concert, but MS MR’s brilliant rendition of one of their best songs was a nice consolation prize.

MS MR are quite clearly on the verge of hugeness. “Hurricane” has already become an alternative radio staple, and “Think of You” is catchy enough that it could not only join it, but launch them into Top 40 territory, as well. As MS MR prepare to become a household name, Saturday’s show made it abundantly clear that they are more than ready for it. Despite only existing for three years, they played with the confidence and precision of a far more experienced band, and served notice to the music world that they are going to be a force for years to come.