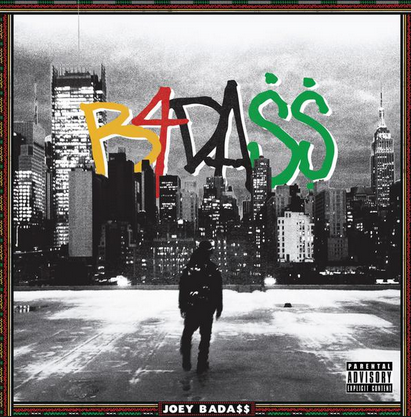 It was just two and a half years ago when Brooklynite wunderkind Joey Bada$$ got rap’s attention with his debut mixtape 1999. Stylistically an ode to the smooth, jazzy times of golden age hip hop, the mixtape was received fantastically and Joey was praised for conscious, prophetic lyrics about his life in Flatbush as a 17 and 18 year old. It was completely out of the ordinary for a 17 year old to have such a defined, retro identity. With a delightfully monotonous flow heavily influenced by DOOM, Joey’s voice fused effortlessly with the light, low-key beats of the project. Several of the instrumentals came from songs from this Golden Era that Joey sought to emulate, originally crafted by the likes of Lord Finesse and J Dilla.

1999 was also an important project because it showcased the talent of Joey’s friends, grouped together under the name Pro Era. The others proved to be talented teens as well, most notably with production from Chuck Strangers, guest verses from CJ Fly, and the emphatic appearance of Capital Steez, the only other rapper in the group on-par with Joey. Yes 1999 put Joey and Pro Era on the map, as Joey hoped to on songs like “Waves” in which he rapped “Hope one day I’ll attract the likes of Madlib, go gold on mad shit and hear my songs mastered / Until then I can do is imagine,  Imma make it all happen.”

A lot has happened to Joey and the crew in these two and a half short years. Pro Era released their debut group project at the end of 2012, Peep the aPROcalypse. What was supposed to be a celebratory event for the crew turned tragic however, when the founder of the group and Joey’s counterpart, Capital Steez, committed suicide soon upon the tape’s release. The spiritual influence to all the Pros, Steelo’s death marked a significant changed in Joey’s subject matter. While there was glimpses of Joey’s Indigo Child, astro-plane, third-eye theories on aPROcalpse, it seems like it took the loss of Steez for these themes to stay consistent in most of Joey’s music. Maybe this is an ode to the spirit and music of Steez, who’s fascinating music was filled with schizophrenic conspiracy theories. Maybe it’s just his true influence on Joey’s mind. Anyway, Joey added a new dynamic to his rhymes, something otherworldly to combine with his Brooklyn commentary.

The next step for Joey seemed to come from critics of the rapper who said that his monotonous rhymes were boring and uninspired, tiring, and without staying power. So on Joey’s second mixtape, 2013’s Summer Knights, he debuted a raspier, more intense flow. Although there was some skeptics to this new sound, it certainly helped Joey develop a variability to his songs. He also began to showcase a Caribbean influence (courtesy of his parents) on this mixtape with songs like “My Yout.” While still heavy on Pro Era features, Joey flexed some of his professional connections with beats from the likes of Alchemist, DJ Premier, and now-frequent collaborator Statik Selektah. It was another well-received project for Joey, and served as the perfect stepping stone to set the stage for his debut album.

Whew. I probably made that intro too long.

Officially released on Joey’s 20th birthday January 20th, B4.DA.$$ (Read “BADASS” or “Before Da Money”) is a concoction of close to three years of Joey developing his craft. Opener “Save the Children,” produced by Statik, is everything Joey. Two verses of wordplay worth at least five fire emojis, over a vintage jazz beat chopped and cut up by Statik Selektah make for a perfect introduction to Badass in 2015. Joey gets another assist from DJ Premier on third track “Paper Trail$,” perhaps the best on the album. An observation on the role money plays in both his life and that of those around him, the track is a testimony to the level-headedness that led us to crowing Joey as a savior a couple years back. Subtle genius lines like “They say money is the root of all evil, I see money as the route of all people, cause we all follow paper trails and everybody gotta pay their bills” and his take on Wu Tang Clan’s “C.R.E.A.M.,” “cash ruin everything around me,” keep me going back to this track, one that almost anyone can relate to.

There is more to enjoy in the way this album is structured. Joey has a lot of creativity and foresight in the way he uses his interludes. intros, and outros between the actual tracks. “Piece of Mind” begins with a call from Joey to his friend locked up, and after brief catching up Joey “plays” the song he wrote for him. The powerful track is Nas-like in it’s form, a song immortalizing his friend. After the track wraps up, Joey’s imprisoned compadre tells Joey that he heard his latest track on Rosenburg’s radio show, and “Big Dusty” the album’s first single proceeds to play.

The track is a high intensity vocal over a brooding piano sample from the hands of Pro Era rapper/producer Kirk Knight, who is responsible for several beats on the album. Built around one of Joey’s catchiest hooks to date, the infectiously repeated “Check my style, check check check it out,” serves as a proclamation of how talented Joey has become as an emcee. As it ends, the song flips into a radio interview in which Joey says he’s heavily influenced by his Caribbean blood and “Hazeus View” starts to play. This track is the first time on the album where Joey talks about Capital Steez and his death, something that he has done in great length in the past, rapping “I survive the question is for how long / Since my homie died, I been tryin to hold on /The happy days of my life is now all gone / But I cope with that weed I smoke and writing these songs.” Joey remains tortured by that loss, even though he may not speak on it much anymore.

One of the most aesthetically pleasing songs on the album is the duet with RnB crooner with BJ the Chicago Kid, “Like Me.” When it boils down to it, this is a song about being well respected in the hood, but with BJ backing Joey’s lines, and the Roots playing along with a J Dilla beat, it just seems so much more beautiful than that. “Belly of the Beast” plays on those Jamaican influences Joey references earlier in the album. It features Jamaican singer-rapper Chronixx and a surprisingly quiet plodding beat from from the usually bombastic Hit-Boy, best known for beats like “Goldie” by A$AP Rocky and “N***** in Paris.” by Kanye and Jay Z.

The two mellow tracks are combatted by two more high-energy singles in “No. 99” and “Christ Conscious.” The former shares several of the same elements to the exciting single from 1999, “Survival Tactics.” There’s an anti-establishment flair to the track, with a black power motor in it as well. “Christ Conscious” is Joey claiming to be as important to rap as Christ himself. “Give me that beat and I’ll put you next to Dilla,” he declares, knowing that he’s one of rap’s elite, an artist that you can get you recognized sheerly by being associated with him.

There are couple instances on B4.DA.$$ where Joey experiments in his styles. “Like Me” with BJ the Chicago Kid was certainly something new to him, and was a great track. “Escape 120” on the bottom half of the album, is a high paced song heavy on drums, and Joey opts for a somewhat sing-songy flow that we really haven’t heard from him before and it’s another nice track. The only track I really don’t like on the tracklisting is the bonus track, “Teach Me,” so it doesn’t really count but it’s worth talking about. It’s got the pacing of “Escape 120,” but has this feature from the singer Kiesza, and their talking about teaching each other how to dance, and it just seems really out of character for Joey. He definitely has his emotional moments in songs, but this just seems like overdose, perhaps an attempt at getting a more poppy radio single. It just doesn’t work.

But that one bonus track is the only real problem I have with B4.DA.$$. The album perfectly encompasses the evolution of Joey Bada$$ as an artist. Elements from all of Joey’s past work are weaved together in project that is just so perfectly Bada$$. The singles add a ton of the edge Joey developed on Summer Knights. The lighter, more thoughtful tracks are emulative of 1999. His spirituality, heritage, and rap experiences appear together on every track. It’s like a condensed anthology of all of his works. The 20-year-old has cut out his own place in rap, something both aggressive and laid back, thoughtful but with NYC braggadocio. Joey is special, and his debut album B4.DA.$$ is a perfect reflection of his artistry. It’s one of my favorite albums in a long time. There’s a reason Obama’s daughter was wearing a Pro Era shirt! Watch the vid for “No. 99” below.